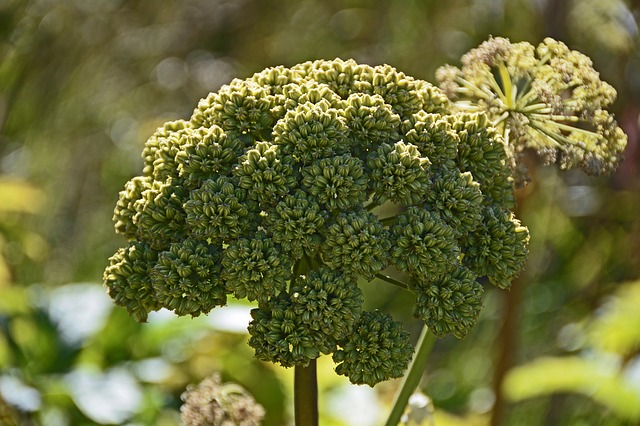 Strong, biennial rarely perennial plant with a pleasant smell, it reaches 1-2.5 m in height. The rhizome is peg-shaped with lateral roots, it has a white, sometimes yellowish sap, which has a pleasant, sweet smell with a distinctly bitter taste. In the first year of life, only a rosette of root leaves is formed, in the second year a large, bare, hollow stem emerges from the rhizome. The stem branches at the top. Inflorescences shield-shaped, 8-15 cm in diameter. The plant blooms only in the second year of life, from June to August. The fruit ripens in September.

The root, less often the leaves and flowers are used for medicinal purposes. When collecting this plant, it is necessary to accurately determine its suitability, as there are more poisonous plants similar to it, as well as the forest bighorn beetle (Angelica sylvestris), which is often found in the territory of Latvia. Special attention should be paid to the condition of this plant, because a damaged plant cannot be used as a medicinal drug. The drug is harvested in late autumn in September-October, and the first year's plants are also dug. The plants of the second year are harvested in early spring in April-May. The roots of medicinal garden Angelica are shortened, shaken off from the soil and the surface part of the plant is cut off. Next, the rhizomes are washed in cold running water, cut and hung to dry. Rhizomes are hung to dry in well-ventilated rooms or forced dryers not exceeding 35-40C.

The leaves are collected during flowering and dried in well-ventilated rooms. The collected drug is stored in well-sealed cardboard boxes or bags for no longer than two years.

The root can also be used as a spice, then it is dug in the phase when the plant ripens its seeds. You can also collect inflorescences from one, haying them in bundles and drying them - in order to obtain plant seeds more easily. The seeds are completely dried on sieves. Dried rhizomes and seeds are stored in closed paper containers - especially rhizomes, because they easily absorb moisture and lose their aroma. As a spice, this plant gives a slightly bitter, slightly burning taste and a pleasant smell.

The medicinal value of the plant is determined by its biologically active substances. The essential oil has choleretic, diaphoretic, tonic, antispasmodic, analgesic, bactericidal, expectorant, diuretic properties, as well as it is capable of enhancing glandular secretion and motility of the digestive tract, reducing fermentation processes in the intestinal tract, normalizing the activity of the CNS, toning the cardiovascular system. system, and also increases bile secretion.

Garden Angelica also has phytoestrogenic and phytohormonal properties that can normalize a woman's hormonal background.

Garden Angelica oil has a bactericidal and antispasmodic effect on the respiratory tract. The honey collected from this plant is also valuable.

In folk medicine, this plant has been known for a long time and is widely used since ancient times. It used to treat the effects of snake bites. Decoctions of garden Angelica root are used to treat liver and gall bladder diseases, as well as colds, bronchitis, laryngitis, neuroses, pneumonia and flatulence.

The above-ground part of the plant is used as an anthelmintic and to be used locally in rheumatism. A decoction of the roots is used as a stimulant, diaphoretic, diuretic, astringent, expectorant, anti-worm, tonic and strengthening agent.

The formulation is used orally in cases of bronchitis, bronchial asthma, epilepsy, hysteria, indigestion, dyspepsia, flatulence, inflammation of the respiratory tract, gastritis, colitis, cholecystitis, gallstones, inflammation of the pancreas, urinary retention, insomnia and "burning", as well as intestinal motility and secretions for activation. Externally, it is used for gout, rheumatism, toothache and earache. The plant extract can be used to rinse the oral cavity in case of various inflammations.

Garden Angelica ointment is used to treat various skin diseases and festering scars. Garden Angelica fruit preparations help to get rid of fever and increase the secretion of bile.

Typhoid, cholera, scarlet fever and measles are treated with flowers. This plant is included in Teriak*, it has been considered a universal remedy for many centuries.

* Universal antidote, which should cure everything, without excluding poisoning, including poisoning of the body caused by internal diseases. The ability to be an excellent preventative was also mentioned. Disappeared after the medieval period.

If legends are to be believed, then the first theory was created during the reign of Emperor Mithridates VI Epatorus (120-63 BC), who was constantly worried about his poisoning.

In ancient Rome, the thearix was first compiled by Andromachus (court physician to Emperor Nero, 37-68 AD).

Before using this plant, it would be advisable to consult a specialist. This plant should not be used during uterine bleeding, pregnancy, abortion, breastfeeding. It should be used very carefully during the period of tachycardia, diarrhea, thrombosis and after a heart attack.

Overdose will cause CNS paralysis, but simple poisoning (long-term use) will contribute to the development of skin diseases.

Various medical balms are made from garden Angelica . From its stem candied fruit, which is used more often, as a remedy. The smell of the garden Angelica is pleasant, but very strong, even more so for the root of the plant. Therefore, the root of the plant can be used in food, but rather as an additive or even a herb, along with neutral-flavored herbs. Roots are used in soups, sauces, stews, but in small quantities!

Garden Angelica is able to perfectly improve the taste of soup! However, after cooking, the root must be thrown out, because if you chew it, the tongue will become numb for a while due to the essential oils. The aroma of the soup will be similar to that of celery! Zucchini is made from young plants when they have only a couple of leaves (2-3), but you can also use the leaf stalks of larger plants.

It is permissible to dry the roots and shoots of the plant for the winter. It should be noted that garden Angelica is biennial plants. Roots are dug for a first-year plant that is not yet ready to flower. It is done in early spring or late autumn!

1 kg of fire flower leaves or St. John's wort, 100 gr. garden Angelica roots, cut into pieces. Place in a clay pot and warm in the oven or oven for 3 hours (heated at low temperatures).

The resulting mass is dried at room temperature.

Garden Angelica roots are dried at room temperature, final drying is done in an oven. Then grind and sift through a sieve. Garden Angelica powder is added to dough, sauces, and coated with meat while frying it.

Garden Angelica in cosmetics acts as a softening and stimulating agent at the same time, it has a pronounced anti-inflammatory effect, at the same time it enhances blood microcirculation in the skin (thanks to coumarins and ferulic acid). Increased blood supply promotes skin regeneration, cell proliferation and tissue regeneration, therefore garden Angelica is one of the powerful preparations.

The effect of the plant extract is multifaceted, for example, the rhizome extract soothes inflamed skin and promotes healing of microtrauma and hernias, besides it has analgesic and antispasmodic properties. In rare cases, mild antibacterial and antifungal effects are also observed.

This plant is useful in cosmetics designed to achieve a "lifting" effect and it promotes strong collagen production.

The basic tasks of this plant in cosmetics are twofold - to soften and make a person more youthful.

Garden Angelica can increase photosensitivity, so after using this plant on the skin, it would not be advisable to go in the sun! On the other hand, garden Angelica essential oil is a strong allergen, if you add more than 3.9% of it to your product, you may experience side effects.