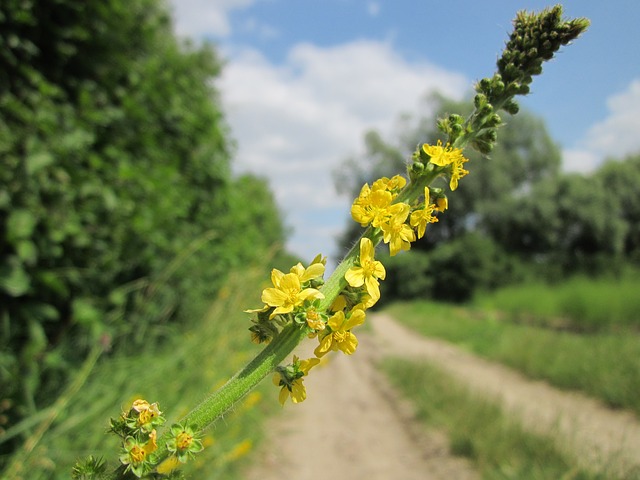 Agrimony  is a perennial plant. Its stem is erect, durable, hairy, 30-100 cm tall. Hairs rough, cover the whole plant. The leaves are tufted, dark green on the top, light green on the bottom. Arranged alternately, lower leaves form a root rosette. The flowers of medicinal gorse are usually five-lobed, yellow in color, arranged in a long spike (~40cm long).

The plant begins to bloom in June and continues until August, in addition, the spike continues to grow in length, new flowers appear and, in parallel, seeds develop instead of already blooming flowers. The plant has a very pleasant smell, which unfortunately cannot be preserved when dried. In September, seed pods begin to ripen, which are able to cling to animal wool and human clothing with their hairs, thus reaching great distances from the mother plant.

The above-ground part and roots of the plant are used for medicinal purposes. The above-ground part of ancīša is harvested during the flowering period (June-July), by cutting the stems 10 cm above the ground. Dry hung in bundles or thinly spread on sieves, in a well-ventilated and shaded place. When drying in forced dryers, the temperature must not exceed 50C.

Roots and rhizomes of Agrimony are dug in autumn, after the seeds have already matured. They are cleaned from the ground, rinsed in running water and placed on sieves indoors (usually in the attic) or forced dryers, not exceeding 60C.

Dried medicinal Agrimony can be stored for up to 2 years, preferably in paper packages; roots - in cloth bags or wooden boxes.

It is important to know that only Agrimony are used in treatment. In Latvia, you can meet, although less often, the feathered Agrimony (Agrimonia pilosa), which can be confused with the plant we need. In order not to get confused, it is necessary to thoroughly familiarize yourself with the plant to be collected, the hairy Agrimony has no hair on the top of the leaves; the fruits are distinguished by conical tiny spines.

As a result of experiments (not on living beings), water solutions have a suppressive effect on the herpes virus, alcohol extracts on alpha-hemolytic streptococcus and aureus staphylococcus.

European scientists have also proven the effect of this plant against helminths. Recent studies have identified flavonoids in the plant, such as rutin and isoquercitrin, which stimulate lymphatic drainage and protect blood vessels.

The phytosterol present in Agrimony perfectly interferes with the absorption of cholesterol in the human intestinal tract, which has a beneficial effect on blood circulation. Choline, or vitamin B4, helps synthesize the amino acid methionine, control the amount of insulin in the blood, and regulate fat metabolism in the liver. The plant has hepatoprotective properties, it is also a powerful bactericidal and anti-inflammatory agent.

The plant provides anti-bleeding properties thanks to the vitamin K it contains. Modern research more often ranks this plant among the plants that can be used to fight tumors.

In folk medicine, this plant is popular and is used both as infusions and as decoctions, as well as in compresses and as an ingredient in ointments. Agrimony is an important component of many medicinal plant mixtures, which are used to treat many different diseases.

It is most often used as a treatment for various liver problems (hepatitis, gallstone disease), as an antispasmodic and choleretic agent. It can also be used as an antidote for alkaloid poisoning, as well as to prevent diarrhea.

Medicinal ancits is useful in case of internal bleeding, also in case of uterine bleeding, as well as in case of cystitis and nocturnal urinary incontinence. The plant also promotes the reduction and absorption of tumors in the bladder and digestive systems.

Decoctions can also be used in baths to relieve fatigue and will also help children with movement and musculoskeletal disorders.

It is possible to get rid of papillomas, including skin warts, with the juice of the plant.

The decoction will help treat lung and heart diseases, as well as reduce edema caused by heart problems.

Medicinal antise leaves can be applied as a patch to stop bleeding and promote faster wound healing.

Medicinal decoctions of Agrimony leaves are used in case of diarrhea, migraine, fever, dropsy. Root poultices are effective in helminthosis, hemorrhoids and rheumatism. The seeds of the plant help cure enuresis. Agrimony oil is used to treat the digestive tract, liver and gall bladder, spleen, promotes the release of stones from the liver and kidneys.

Of course, this plant is also not used during pregnancy and lactation.

Agrimony has a tonic, anti-inflammatory and rejuvenating effect. It is found in various cosmetics intended for facial skin and body care. You can also find it in shampoos that perfectly soften hair, give it shine and strengthen hair roots.

The plant also has a beneficial effect on metabolic processes and enhances tissue regeneration, besides, it strengthens the stability of other elements, preventing them from easily collapsing. Medicinal gooseberries are used to tone the tissues and get rid of wrinkles.

Agrimony products are also widely used in cosmetics that treat skin problems such as:

The oral cavity affected by stomatitis, gingivitis, periodontal disease and angina can also be treated with the medicinal ancice products.