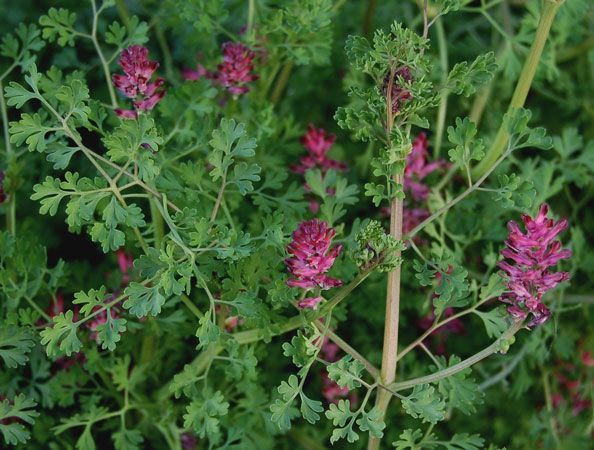 Common Fumitory is an annual plant, 30-40 cm tall. Stem erect or erect, glabrous, thin and branched. Leaves blue-green due to the wax layer, divided twice or more into many linear lanceolate tufts. The flowers are small, white, lilac or pink. The fruit is a brown nut with many small seeds. The plant blooms in June-July, the fruits ripen until mid-autumn.

The above-ground part of the plant is used for medicinal purposes. The plant is harvested during the flowering period of the plant (June-July). The plant is dried by spreading it in a thin layer on sieves in a well-ventilated room. Can also be dried in forced dryers, not exceeding a temperature of 45-50C. Store the drug in paper bags for no longer than one year.

According to clinical and pharmacological studies, the Common Fumitory activates the secretion of bile. Thanks to its unique chemical composition, the plant has a wide range of effects on the human body: diuretic, hypotensive, antispasmodic, anticholinergic, antihistaminic.

Due to the presence of potassium compounds, the Common Fumitory extract can be used as a good diuretic. The alkaloid prothorpine improves appetite, has an active effect on carbohydrate metabolism, has a short-term, stimulating effect on the CNS, the plant also accelerates the pulse. The tannins present in the plant produce antiseptic and anti-inflammatory activity. In general, Common Fumitory has a strengthening effect on the entire human body, its immune and nervous systems.

Long-term use of the plant does not cause habituation and the health condition does not deteriorate. As a result, the processes of bile production and its release are stabilized, the functioning of the digestive glands is normalized, digestion and appetite improve, the activity of fermentation processes in the intestines decreases, and constipation disappears.

In folk medicine, Common Fumitory is used to prepare medicinal preparations, alcohol extracts, decoctions and ointments. Freshly squeezed juice from the surface part of the plant is also often used.

Alcohol extracts and preparations of the plant are used as antispasmodics, in case of hypoacid gastritis, spastic colitis, flatulence, liver disease, gallstones. Common Fumitory is effective in cases of hysteria, hypochondria, it is used as an antispasmodic in case of gastric and duodenal ulcers, promotes normalization of heart activity, strengthens uterine muscle tone.

Common Fumitory has anti-inflammatory and diaphoretic properties, so decoctions of this plant are used in folk medicine, together with herbs intended for colds. Decoctions of the fresh plant will be able to help against edema caused by the heart. Common Fumitory will also help cleanse the body of cholesterol deposits.

Freshly squeezed juice of Common Fumitory will be effective in treating pulmonary tuberculosis, fever, hemorrhoidal bleeding and other internal organ bleeding. It also treats dermatosis and scabies of various origins. During the winter period, when the plant is not available, it is safe to use a dried/soaked plant for various compresses and applications.

Common Fumitory seeds will be useful for men to deal with male impotence and also treat impotence.

It is important to know that the Common Fumitory is a poisonous plant, so this plant, in any form, must be used strictly according to the prescribed dosages. An overdose of this plant causes increased urine output, possible spasmodic pain in the abdominal area, diarrhea, digestive tract disorders.

The plant should not be used during pregnancy, lactation and children under 12 years of age. Allergic reactions to this plant are possible.