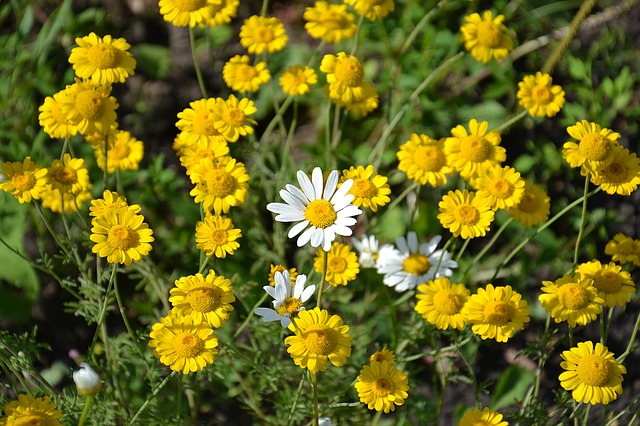 Plants of the Chamomile family tend to be perennial and annual, both in the form of single grasses and shrubs. The rhizome is usually practically horizontal and highly branched with many small roots. The leaves of the plant are usually tufted, doubly tufted and without petioles. Chamomile form only rosettes of leaves in the first year, and bloom in the second year. Inflorescences are formed at the ends of the stem and branches, usually white, rarely yellow.

The inflorescences are relatively large, 2-3 cm in diameter. Chamomile bloom practically throughout the summer. In autumn, after ripening the seeds, the stems die, in the spring, new ones form from the rosettes of leaves.

Chamomile flowers are usually used for treatment. They are usually collected during mass flowering (June-August). The flowers are collected when the middle part of the inflorescence has not yet fully opened and its middle is still flat. This period has the highest content of essential substances. Dry in a shady place not exceeding 40C. The drug is stored in paper bags for no longer than 2 years.

Essential substances up to 1%, sesquiterpene lactones, rubber, polyacetylenes, quercetin, which belongs to group P vitamins, flavonoids (anthemoside, cosmoside), waxes, coumarin and an as yet unexplored glycoside are found in the plants of the Chamomile family. Also interesting is the fact that luteolin derivatives dominate in Chamomile with white flowers, while apigenin dominates in yellow Chamomile .

Polyacetylene compounds were found in the roots of Chamomile.

Yellow Chamomile has insecticidal and bactericidal properties. Its diuretic, anthelmintic, anti-malarial, choleretic, diaphoretic, anti-bleeding properties have long been known in folk medicine. Decoctions of flowers are often used as an anti-inflammatory and expectorant agent.

Roman chamomile essential oil has an antispasmodic and anti-inflammatory effect. In folk medicine, it is used in case of insomnia, anxiety, climax.

There are also reports of a medical nature that dogwood has also been used in medicine. St. John's wort is an herb used in many folk recipes, as this herb is known for its antispasmodic, diuretic, anthelmintic and wound healing properties. Dog bark is used in folk medicine as a decoction and poultice for stomach spasms, migraines, convulsions, metrorrhagia and malaria. Externally, it is used to treat dermatitis and wounds.

Despite the pronounced similarity between Roman chamomile and Medicinal chamomile, the chemical composition of these plants differs significantly, but laboratory studies show that their effects are close to similar. Chamomile has antimicrobial as well as moderate fungistatic properties. Experiments have determined Chamomile anti-edema and cytostatic effect (carcinoma development was suppressed in vitro). The repellent properties of Chamomile urine were also determined.

European scientists have determined a unique property of Yellow yarrow - the plant's active substances are able to normalize the balance of vitamins and trace elements in the human body, regardless of their presence or absence in the human body. Its anti-bleeding properties are also unique, so it is widely used therapeutically for the treatment of hemorrhagic diathesis, capillary toxicosis, retinal hemorrhages and other diseases in which vascular permeability is impaired.

Experimentally, essential oil prepared from fresh flowers of Roman chamomile produced a pronounced activity against gram-positive bacteria (Staphylococcus aureus) and also suppressed the development of dermatophytes. It has also been scientifically proven that alcohol extracts were able to quickly deal with intestinal coliform and protozoan infections. Research was done on animals, in which it was noticed that their aggression was drastically reduced.

World-famous aromatherapist Ruth von Braunschweig from Germany proved that just one drop of Roman chamomile essential oil applied to the solar plexus can calm the human nervous system and reduce the negative effects of stress.

Possessing anti-inflammatory, carminative, spasmolytic and other properties, Roman chamomile is widely used in the medicine of various nations, as decoctions in the treatment of stomach diseases, colds, diathesis, atopic dermatitis and as a bile and urine expelling agent. Decoctions of flowers are also effective in uterine bleeding. Of course, all these decoctions can also be used externally to reduce inflammation, as well as to rinse the mouth!

The juice of the dogwood is used in the treatment of malignant formations. A decoction from the root of this plant is used to improve male potency, and is also used in epilepsy, as polyacetylene compounds are found in the roots. You can also treat aching teeth with the help of such a decoction. Puppies, regardless of the species, are a good remedy for helminths.

Chamomile flowers can also be infused with vegetable oil and will make an excellent remedy for smearing in case of pain caused by rheumatism.

None of the medicinal Chamomile species usually cause any side effects, however, you should be careful and not use this plant during pregnancy and lactation, as well as not treat small children with it. Basically, all side effects from Chamomile occur only in the event of an allergic reaction, for example, if a person is allergic to pollen, as a result, a person may end up in a state of anaphylactic shock!