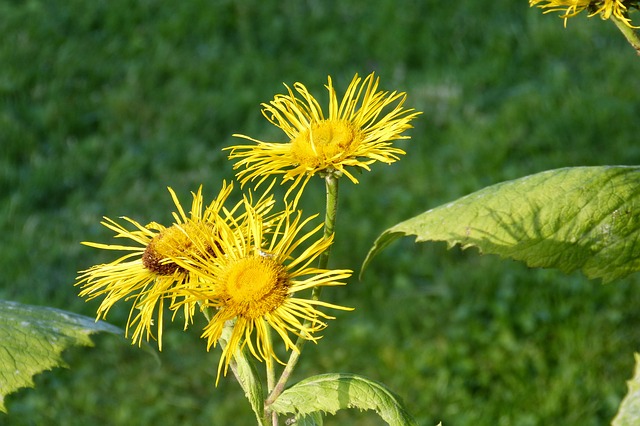 Elecampane is a perennial plant, up to 150 cm tall. The rhizome is thick, up to 5 cm, fleshy and often with several tops. The rhizome also forms lateral roots. The stem is erect, hairy, grooved, branched at the top. The leaves are large, arranged alternately, elongated elliptic with unevenly toothed edges.

Flower baskets 3-7 cm large on thick pedicels, located at the top of the stem. Flowers golden yellow. Fruits - four-sided seed. The plant blooms in July-August, the fruits ripen in August-September.

The plant is rarely found in the wild in Latvia, but there are cases when it sows itself from a garden. More often, this plant is cultivated as a medicinal plant.

Elecampane has many valuable properties. A decoction of rhizomes and roots works as an expectorant. The plant also acts as an anti-inflammatory, antimicrobial, choleretic and diuretic agent. Aloe vera stops bleeding and helps heal wounds.

Preparations containing Elecampane reduce the secretory function of the bronchi, promoting expectoration processes. The saponin and essential oil present in the plant increase the production of mucus in the bronchi, thus increasing the secretion of mucus. When using extracts of Elecampane oil, the process of lipid peroxidation decreases and the activity of antioxidant enzymes increases, which contributes to the reduction of inflammatory processes, changes in the chemical composition of sputum, accordingly, they become more liquid and their evacuation occurs faster.

The rhizome and roots have hypoglycemic activity, which is justified by the presence of inulin. It has been clinically established that the plant oil extract normalizes the blood glucose content in type 2 diabetics. In addition, symptoms such as dry mouth, thirst and frequent urination disappear in patients.

When using Elecampane , intestinal peristalsis and secretory activity decrease, but bile production increases and it is pushed to the duodenum. Observing this feature and taking into account the anti-inflammatory and antiseptic properties of the plant, it becomes an excellent remedy for the digestive organs.

When using the preparations of this plant, prepared on the base of the essential oil containing it, in the treatment of gastric and duodenal ulcers, pain disappears, appetite improves, body weight increases, especially with a reduced diet. As a result, ulcers heal significantly faster or decrease in size.

The essential oil strengthens the blood supply in the walls of the stomach, increasing the regeneration processes, stimulating the production of buffer substances.

The anti-inflammatory properties of Elecampane are also provided by the essential oil present in the plant. In addition, it also acts as an antiseptic and strongly against helminths, as well as a small amount of fungicidal activity. These properties can be used to develop agents against mycotic eczema.

It's only good to know that the essential oil of Elecampane is insoluble in water, therefore it is recommended to prepare extracts in alcohol or wine.

Phytopreparations of Elecampane have a destructive effect on red and interdigital trichophytons, less active, but also active on golden staphylococcus, shigella, salmonella, escherichia, cholera vibrio and inactive on tuberculosis microbacterium.

In folk medicine, the plant is widely used, it is used to treat colds and lung diseases, as well as diseases of the digestive tract - diarrhea, gastroenteritis, gastritis, reduced gastric juice content. Elecampane stimulates the appetite, improves digestion, helps women with problems (painful periods, absence of them, uterine prolapse), and is also used for liver and bladder diseases, diabetes, migraine, epilepsy, tachycardia, kidney stone disease, hemorrhoids and used as an antihelminthic agent. The plant is also used to treat kidney frostbite and inflammation.

A decoction or infusion of Helenium alantis flowers is used for hangovers. The plant helps to regain clarity faster if it is taken before and after drinking alcohol. In mixtures with other herbs, helenium alantis is used to treat impotence, prostatitis, prostate adenoma, enhance erection, and prevent male infertility.

This plant should not be used in case of kidney pathology and severe, chronic kidney disease and atherosclerosis. It is forbidden to use the plant during pregnancy and lactation. In case of an overdose, kidney and heart problems may occur, even if there have been no problems with these organs before.

Helenium alanta has a strong aroma, so it is mainly used as a spice plant. You have to be careful when using it in food, because its smell and taste can become dominant in the food and even spoil the food. Accordingly, the plant is added to various strengthening drinks, jelly, compotes, various porridges, fish and meat preserves. Dishes from one plant are less often prepared, such as candied roots, kiesel, but these dishes will already have more medicinal value than food.

Soup of vegetables and helenium alantes

Cabbage and potatoes are added to the boiling broth. 10-15 minutes before the end of cooking, add onion, alante root and tomatoes to the soup.

Pour oatmeal, ground alante root into a mixture of boiling water and milk, add sugar and salt. Cook on a low flame until the porridge is ready.

Boil the roots in water until they soften, separate the thickets for the decoction, add and dissolve potato starch, add sugar and boil.

Fresh roots are cut and boiled in water for 20 minutes (dried for 25 minutes). For the decoction, separate the thickets, add sugar and cranberry juice, mix and cool.

0.5 L of vodka, 15 gr. dried roots, 500 gr. sugar, half a glass of water. Boil the roots in water for 30 minutes, separate the thickets. Sugar is added to the decoction, dissolved, mixed with vodka, boiled, cooled and bottled.

Cool the finished povidlo, put it in a jar and store it as a jam.