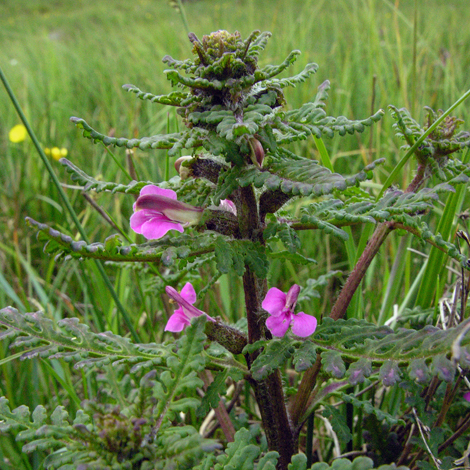 Perennial, rarely biennial and annual semi-parasitic plant, 15-50 cm tall. Rhizome peg-shaped, thick. The stem is erect, solitary, heavily branched from the base, often reddened and sparsely hairy. The rhizome leaves are small, smooth, elongated, sessile, forming a rosette of rhizome leaves, the leaves of the stem are deeply tufted, with white teeth along the edge of the leaf. The leaves are arranged alternately, rarely opposite. Flowers (20-25mm long), bisexual, zygomorphic, solitary, sessile on short peduncles, in upper leaf axils, sometimes forming compact racemes and spike-shaped inflorescences. The flower is double-lipped, raspberry-colored or pink. The upper lip is practically straight, two-parted, slightly narrowed at the beginning, slightly curled at the tip. Bottom flat, three-part. The fruit is a box, with a short "nose". Seeds with endosperm, elongated ovoid, with a reticulated surface, dark brown in color. Blooms in June-July.

The finished drug is stored in an airtight container, in a dry and cool place. Harvesting is done using rubber gloves to avoid possible side effects, as the plant is poisonous.

All the parts of the Marsh Lousewort contain the glycoside aucubin (rinantin), as well as iridoids, alkaloids, saponins, tannins and flavonoids.

The medicinal properties of the Marsh Lousewort are widely used in folk medicine. For example, the flower arrangement can be used as a diuretic, but the linden arrangement can be used as an anti-diarrheal agent with a mild effect. In some cases, a weak sedation is used to normalize heart function, reduce migraine attacks, and also common headaches. Preparations of Marsh Lousewort are used to reduce fever and snakebite.

The herbal preparations are also known to stop bleeding, so they are also used in case of uterine bleeding and heavy menstruation.

Decoctions of Marsh Lousewort (externally) are used to speed up wound healing. In addition, folk scientists use this same decoction as a powerful diuretic. In ancient times, plant extracts were also used in cases of meat poisoning, it absorbs and removes toxic substances and poisons from the body.

In folk dermatology, plant extracts are used to get rid of dandruff, treat seborrhea and even expel lice and exterminate nits. In the people, this plant is also used to rid pets of insects.

Wounds of animals were also treated with crushed leaves in veterinary medicine.

Marsh Lousewort is a poisonous plant, so its use is permissible under the supervision of a specialist and its use must be justified.

It is understood that this plant is not compatible with use during pregnancy and lactation, nor is it used to treat children.