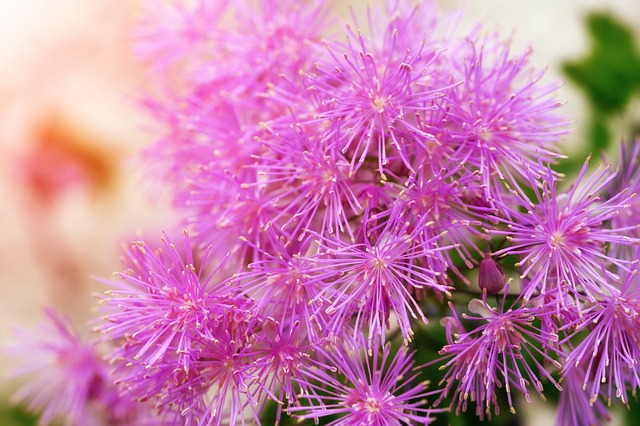 Meadow-rue are perennial perennial plants with a short and thick root, an upright stem 40-150 cm. The plants are glabrous. Leaves only on the stem, large, few, without leaflets, divided into two or three parts, on short petioles, expanded at the base.

The root and the surface part of the plant are used for medicinal purposes. The leaves and flowers are collected during the flowering of the plant (June-July), by cutting the leafy part of the plant (the upper side of the stem 30-35cm). Tie in small bundles and let dry, or spread a thin layer on drying nets, it is recommended to dry in natural, sun-protected and well-ventilated conditions. A dried drug retains its green color and consists of leafy stems with flowers and often fruits. The drug has a weak aroma and a bitter taste. Stored up to 2 years.

Roots are dug in autumn, September and October. Roots are stored in bags for no longer than 3 years. It is allowed to dry in forced dryers not exceeding 45C.

Meadow-rue has a very broad spectrum of medicinal effects, it is bactericidal, anti-tumor, diuretic, choleretic, laxative, anti-inflammatory, wound-healing and tonic.

The plant accumulates lithium in itself, it is an element that plays a major role in the regulation processes of the nervous system. The alkaloids present in Meadow-rue have different effects, for example talmin has a depressing effect on the CNS, relaxes the smooth muscles, significantly reduces arterial blood pressure; berberine suppresses cell division and has a therapeutic effect in the treatment of leishmaniasis and malaria.

The alcohol extract of the plant has a pronounced vasodilating effect and lowers arterial blood pressure.

In folk medicine, Meadow-rue are used in ointments, decoctions, poultices, extracts, and in powder form to treat various ailments. Meadow-rue preparations act as anti-vomiting, anti-edema, strengthening and heart-supporting effects. It is used to treat diseases of the digestive tract, headaches, colds and other ailments.

Meadow-rue preparations are effective in convulsions and neurosis, in epilepsy, indigestion and diarrhoea, in the treatment of stomach, liver and gall bladder diseases, as well as in stopping internal and external bleeding.

In folk medicine, Meadow-rue is also used in gynecology, as a means to stop bleeding, as a diuretic and in case of nosebleeds.

Folk medicine recommends the use of Meadow-rue, in the early stages of hypertension, as a hypotensive agent to widen blood vessels and lower arterial blood pressure, and it is also recommended to be used in cases of angina pectoris and circulatory disorders.

Externally, the setting of the Meadow-rue is used as a wound-healing and bleeding-stopping agent, it is used to treat wounds, ulcers, purulent wounds, skin rashes, etc. Compresses of a decoction of the plant help in cases of arthrosis and arthritis, regardless of their origin.

Local applications are made from fresh Meadow-rue to treat hernias, purulent wounds, bruises, panaritis, as well as reduce exacerbations of rheumatism.

Meadow-rue (all types) are poisonous. For the medicinal purpose of those things, you must strictly follow the prescribed doses and recommendations of specialists, so as not to create additional adventures for yourself. Meadow-rue preparations should not be used in case of bradycardia, weak heartbeat, hypotonia, atonic constipation and individual intolerance. Of course, the plant is not used during pregnancy and lactation, and children are not treated with it.