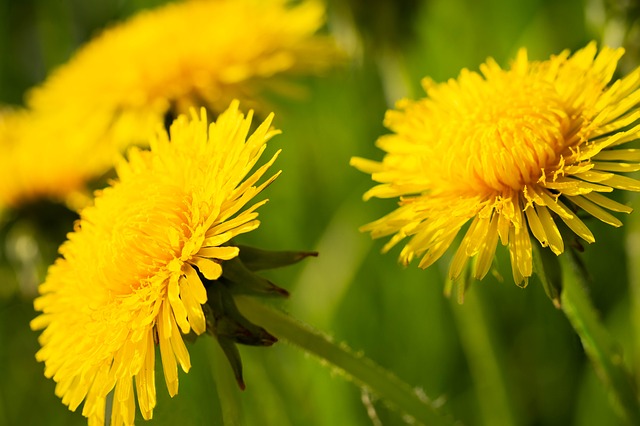 Common Dandelion is a perennial plant that grows to a height of 50 cm. Dandelion has short roots, but in the middle there is one strong and fleshy root 20-60 cm long. 1-2 cm in diameter, reddish brown on top, white inside. The leaves are elongated with a robotic edge, on average 20 cm long, which grow from a root rosette.

The flower stem is erect, without leaves, up to 40 cm tall, at the end of which there is a golden yellow inflorescence with an average diameter of 3-5 cm. The calyx of the inflorescence contains up to 200 tongue-shaped flowers of both sexes.

The biggest flowering time of the Common Dandelion began in May, often repeated flowering and seed formation can be observed during the summer. The seeds are formed with a fluffy "parachute", on average 3-4 cm long. Ripe seeds are sown long distances by the wind. The plant is rich in milk.

Dandelion roots (Radices Taraxaci), which are harvested from August to October, are used in medicine. Also collect the root together with the rosette of leaves, in early spring before flowering.

Dandelion roots are cleaned from the remains of leaves, side roots, root tip and upper neck, washed in cold running water. The prepared roots are twisted for a couple of days and finish drying in ovens at a temperature of 40-50C.

Common Dandelion belongs to plants that contain bitter substances. It is used to improve digestion and appetite. Dandelion acts as reflectors, irritating the taste receptors on the tongue and the mucous membrane of the oral cavity, which promotes the activation of the esophagus and further the secretion of gastric juice increases, correspondingly the other glands involved in the digestive process are also activated. According to phytotherapists of different countries, dandelion is the best stimulator of liver function.

Modern medicine recognizes that Common Dandelion has a choleretic and antiatherosclerotic effect, inhibiting the absorption of cholesterol, helps remove toxins from the blood, strengthens the pancreas, increasing the release of insulin.

Milkweed juice is an effective diuretic. And it is a powerful source of potassium, which is usually flushed out of the body with urine. Dandelion leaf juice keeps the digestive organs in tone and boosts metabolism. This juice can also be considered rejuvenating.

Juice is squeezed from the leaves to reduce swelling and remove excess fluid from the body, especially if it is associated with heart disease or urinary disorders.

In the northern part of Europe, it is more often used in diabetes mellitus and pulmonary tuberculosis.

In Asian medicine, Common Dandelion is used to treat lymph node inflammation, hypogalactia, and snakebite. Also, all parts of the dandelion are used as a tonic, diaphoretic, antipyretic and appetite stimulant.

Common Dandelion is a product containing an active substance, which can cause side effects in the case of various diseases, when it should not be used. It should not be used if there are any blockages in the bile ducts, as well as in the case of gastritis or stomach ulcers, if the acidity and amount of stomach acid is increased. You should also follow the dosage, because an overdose can cause nausea, vomiting and diarrhea.

This ubiquitous plant is rich in substances necessary for skin and hair. It contains many minerals and vitamins such as copper, calcium, manganese, iron, boron, magnesium, zinc, potassium and B6, A, B1, C, B2, B12, D.

Common Dandelion for hair and skin

All parts of the plant can be used for cosmetic purposes, but it is best to use the roots directly, as they are easier to store.

Dried dandelion roots are ground to a powder state before use. You can use this powder:

In many countries, young dandelion leaves are a delicacy and there are even countries where the dandelion has been bred to increase the mass of its leaves. Dandelions of various species are used in food, unfortunately, only Common Dandelion and, rarely, swamp dandelion (Taraxacum palustre) are found in Latvia, but it is recorded in the Latvian Red Book in category 2. But if you eat it without recognizing it, nothing bad will happen. There are special species of salad dandelions in the world. Dandelion is especially cultivated in France, where it is held in special esteem.

The most unpleasant thing that a dandelion user encounters is the bitter substances in the plant, which are not particularly abundant in the plant in the spring, but are still present. It is not desirable to completely get rid of them, because they ensure the medicinal properties of the plant, including improving appetite. However, there are options for reducing the amount of bitter substances in the plant. One option is to bleach the leaves. Dandelion loses both its green color and bitter substances when growing without light. Cover a growing dandelion with some light-proof material - even put a bucket on the seedling. After a few days, when you remove the bucket, the leaves will have turned white and stretched - such a plant will no longer be bitter. It's not fast, but it makes a great salad topping. There is an option to wash the leaves, but you will lose not only the bitterness, but also the vitamins. And you can also keep the leaves in salt water (recommended cut the leaves into smaller pieces) and taste the moment when the leaves have lost enough bitterness. On average, 20 minutes is enough.

Dandelion leaves can be harvested until the first flowers appear, at which point the leaves become hard and tasteless. But, the dandelion still retains the possibility of eating it. We are only now collecting the unopened flowers (buds). Dandelion buds are marinated in vinegar and used in salads or soups in this way, equivalent to capers (Capparis spinosa l.). Still small and dense buds can be eaten fresh. They can also be added to soups, salads, and garnished with meat dishes.

In September, after the summer dormancy of dandelions, you can focus on collecting dandelion roots. Dandelion roots can be baked like potatoes. During the heating process, the bitterness in dandelions will disappear and the roots will even become a little sweet. By roasting the roots without oil, until brown, you will get a coffee substitute.

Keep the dandelion leaves in salt water for 45 minutes to remove the bitterness, then chop. The rest is prepared as usual.

Salad with Common Dandelion and egg

Prepared dandelion leaves and bow are chopped, sauerkraut and egg are added. Add salt and cream.

Keep dandelion leaves in salt water (in the refrigerator), dry, grind in a meat grinder, add salt, pepper, vinegar and dill. This puree is used as an addition to soups and second dishes.

Fresh dandelion inflorescences (unopened) are crushed in a saucepan, poured with boiling marinade, brought to a boil and kept on a low flame for 5-10 minutes. Marinade is prepared in the same way as for all greens.

Boil the dandelion rosettes in a 5% salt solution, remove them from the water, cover them with dried fruit, fry them. Add small pieces of fried beef and serve hot.

Root rosettes should be collected in early spring, when the leaves begin to grow and they rise 2-5 cm above the ground. The plant is cut in the root part. Such rosettes are carefully washed and soaked in cold salt water for 1-2 hours so that they lose their bitterness. The water can be drained, the rosettes can be frozen in a 10% salt solution and stored for a long time.

The roots are thoroughly washed with a brush, dried, roasted in the oven until they brown. Accordingly, they are ground and prepared like coffee.