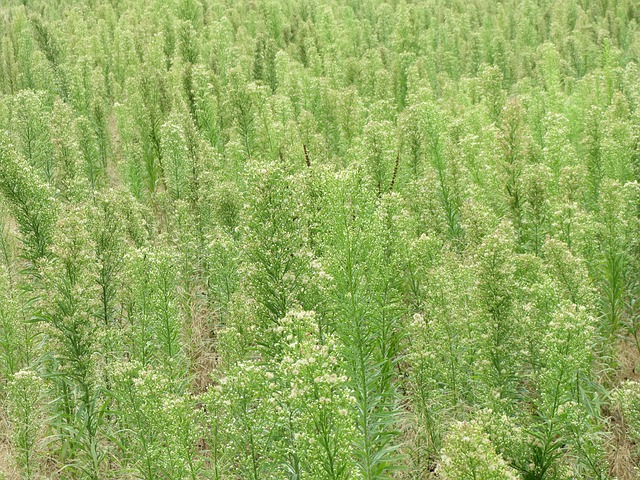 Canadian Fleabane is an annual plant, 15-150 cm tall (rarely, up to 200 cm). The stem is erect, grooved, branched at the top, covered with rough hairs. The leaves are arranged alternately, without leaflets, the upper ones are sessile, with a smooth edge, the lower ones are on short petioles, rarely toothed along the edge. Leaf lobes linear-lanceolate, elongated pointed, hairy. The flowers are small, whitish, arranged in small, special type of inflorescences - baskets. Fruit - testicle. Seeds without endosperm. Blooms from June to September.

Medicinal properties are found in the above-ground part of the plant - stems, leaves and flowers. The plant is harvested without the rough parts of the stem (lower parts), during flowering. Cut the top of the plant, on average 10-15cm, hay in bundles, hang under the canopy, in a shady and well-ventilated place. Place the flowers separately from the stems on paper and dry them. The finished drug is stored in a breathable container (cardboard boxes) for up to 1 year.

Canadian Fleabane is an essential plant, in which 0.33-1.72% essential oil can be found. In addition, biologically active substances such as flavonoids, saponins, alkaloids, tannins, choline, vitamin C, limonene, terpineol, dipentene, aldehydes, resins and mineral salts are found in the plant.

Canadian Fleabane has astringent, hemostatic, anti-inflammatory and strengthening effects. In addition, the plant is effective against dysentery. In addition, its preparations are able to improve hair growth.

In folk medicine, Canadian Fleabane is used, basically, as an anti-bleeding, anti-dysentery and body-strengthening agent. In case of uterine bleeding, the most popular is essential oil of Canadian Fleabane (10-15 drops). Plant extracts are used not only to stop bleeding (uterus, nose, intestines, lungs, childbirth, teeth, etc.), but also to treat gout, arthrosis, cystitis and prostatitis.

Canadian Fleabane is an effective remedy when used in combination with other herbs. For example, in the case of rheumatoid polyarthritis, an alcohol extract is used with the addition of St. John's wort, while in the case of endometriosis, the extract is supplemented with the flowers of lavender, yarrow, St. John's wort, calendula, and Canadian Fleabane .

In folk medicine, preparations of Canadian Fleabane are used in case of heavy menstruation, it is effective in the climacteric period, in case of inflammation of the bladder and prostate gland, as well as for stopping hemorrhoidal bleeding.

Decoctions of the plant treat eye diseases, rashes and scabies. When you wash your hair with this decoction, it strengthens it and stimulates its growth.

Canadian Fleabane does not cause side effects, but it is not recommended to be used during pregnancy and lactation, and children are not treated with its preparations.

A decoction of Canadian Fleabane is used to treat various skin diseases (dermatoses, rashes, scabies). In addition, this plant is effective in the care and restoration of damaged hair.