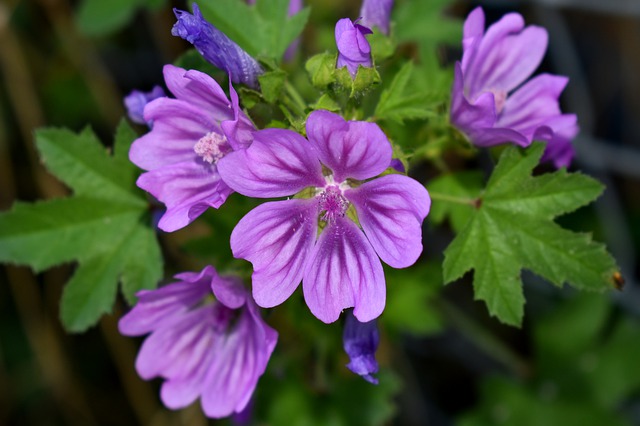 The fruit is dry and splits into several parts (mericarps) when ripe. Seeds with endosperm. Characteristic glottis cells in the flower. Blooms from June to September. A heat-loving plant.

In folk medicine, the roots, leaves, flowers and stems are used in their entirety. The above-ground part of the plant is harvested until the plant has started to bloom. Leaves are cut with stems 2 cm long. The leaves can be collected from June to September. Flowers - during the boutonization period until they bloom. Roots are dug in autumn. To preserve the active substances, the plant is dried at low temperatures or on sieves in a well-ventilated and shaded place. Flowers, leaves and roots are stored for up to 2 years.

The medicinal properties of common Mallow are determined by its chemical composition. The plant contains terpenoid compounds (monoterpenoids, norsesquiterpenoids, diterpenoids); phenols and their derivatives (4-hydroxybenzyl alcohol, tyrosol); phenolic acids (including ferulic acid), coumarin (scopoletin). It has even been found: in leaves - flavonoids, in flowers - anthocyanins (pigments), in stems and leaves - fatty acids, as well as vegetable fats (<18%). The plant also contains ascorbic acid (<3% in leaves, <1% in flowers) and vitamin A (in leaves <0.05%), sugar, mucilage and tannins.

Common Mallow has many medicinal properties: covering, anti-inflammatory, expectorant, softening, soothing, analgesic, immunostimulating properties. It has been determined in the experiment that the common Mallow water extract acts as an immune system stimulant and antioxidant. The extract has antibacterial activity. Common Mallow preparations also have digestive tract regulating properties.

Common Mallow is a plant that has long been known in natural healing. Flowers, leaves, stems and roots are commonly used in folk medicine. In addition, folk scientists recommend using plant extracts and decoctions both internally and externally.

Preparations from the flowers and leaves of the common Mallow are used to treat spastic colitis, constipation, as well as as a sedative in case of long-term cough, colds, flu, bronchitis, stomatitis and periodontitis. Common Mallow is an effective remedy for the prevention of diseases of the digestive tract and urinary tract. With its help, inflammations in the digestive tract, kidneys and urinary tract are relieved. Decoctions and decoctions are taken orally, as well as gargles and inhalations to relieve coughs, colds, hoarseness and catarrh of the throat.

The root and surface part are used to treat conjunctivitis and blepharitis, leaves and flowers as compresses for tumors. In the practice of folk medicine, fresh common Mallow leaves are used to fight avitaminosis.

Common Mallow is included in medicinal plant mixtures with yarrow, oats, medicinal chamomile, baths, ointments and compresses. Compresses of flowers and leaves are used to soften the breasts during breastfeeding.

Common Mallow is also widely used in home cosmetology and dermatology. The decoction is used externally in applications to soften and remove itching in case of skin diseases. Compresses from common Mallow are used to heal purulent wounds, burns, consequences caused by herpes viruses, in case of dyshidrosis, as an anti-inflammatory agent. Common Mallow root is recommended for rinsing hair after shampooing. Flowers and leaves are included in cosmetic mixtures used for facial masks - for dry and sensitive skin, age wrinkles and to refresh the facial skin.

The plant is used to treat impotence.

So far, no side effects have been found that could arise from the use of common Mallow . However, it would not be desirable to be irresponsible when using this plant.

Before the advent of cultivated plants such as spinach and lettuce, this honorable place was occupied by common Mallow . This plant is especially popular in Georgian cuisine, where it is still grown as a vegetable. And if you look for Georgian recipes, you will find many recipes in which one of the basic ingredients will be common Mallow, mainly its leaves.

Common Mallow leaves and flowers contain a lot of mucilage, vitamins and provitamin A, which determine not only the medicinal value but also give the plant nutritional value. The leaves are used as a seasoning for various soups, dried, rubbed into powder and added to salads and other dishes, as well as sauces. Unripe fruits are marinated and put in borschts, rosolniks and solyankas.

Grind mallow leaves in a meat grinder and add them to water, 5-10 minutes before the potatoes are ready, add spices, pan-fried onion and carrot.

Soak the dried plant in a glass of water and leave it for 1 hour. Mallow leaves are ground in a meat grinder, flour, onion fried in a pan, oil, spices are added and mixed. Serve cold.