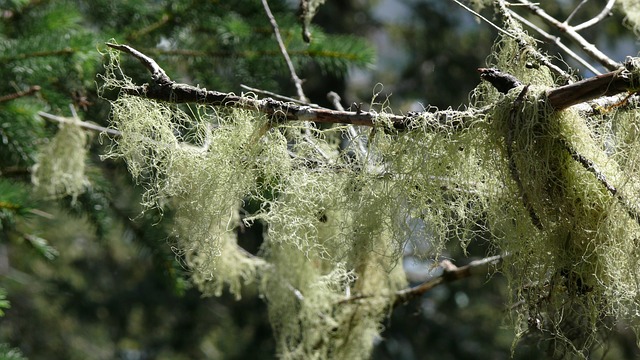 Beard lichen is widely used in folk medicine and homeopathy. It is known for its anti-inflammatory, antispasmodic, fever-reducing properties, Beard lichen activates the immune system, has a beneficial effect on the heart and blood vessels, lowers blood pressure and regulates metabolic processes, helps regulate the functioning of the esophagus.

Like most lichens, the Beard lichen is rich in usnic acid, which has strong antibiotic properties. It will be effective against staphylococcus aureus, streptococcus, pneumococcus, Candida fungus, tuberculosis microbacterium, etc. Lichen will be useful in cases of dysbacteriosis, respiratory diseases, and even to treat lung cancer and skin melanoma, etc.

Even today, lichen is widely used in developed countries, such as Germany, to treat inflammations and diseases of the oral cavity, as well as for excretory system problems (for example, gonorrhea).

Like other lichens, this one was also used in the antibiotics created in Soviet times, called Binin. Binin is used for the treatment of various inflammations and burns, both internally and externally. It is also used to treat uterine erosion.

The beard lichen belongs to the shrub-like lichens. Its foliage is yellowish-green, resembles a "beard", tends to reach 1-2m in length. Lichen branches are hard and cylindrical, "hairy" at the ends, covered with small spikes or semicircular mounds. White, powdery or grainy dots form on these mounds, with the help of which the lichen reproduces.

The Beard lichen can be collected throughout the year.

The extract of Beard lichen is well known in the cosmetology industry, it is known as an antibacterial, anti-inflammatory, antifungal, wound healing, exfoliating, antioxidant, immunomodulating and deodorizing agent. Beard lichen extract is found in deodorants, gels, creams, aftershave lotions, sunscreens and toothpastes. Lichen can be used to treat liver, seborrhea and various types of dermatitis.

In ancient times, decoctions of Beard lichen were used to reduce freckles and pigmentation spots. Beard lichen powder effectively healed wounds, eczema, boils, burns and skin cracks. Cosmetologists successfully use bearded vulcanizing agents in the case of Vitiligo. Lichen powder in the bath will be able to help normalize the normal function of melanin secretion in the skin.

1.12% usnic acid, which has strong antibiotic properties, was found in Beard lichen. More of this acid is produced in the young branches of the lichen. Lichen also contains bitter substances, ascorbic acid, iodine and other valuable elements.

Usnic acid is actively used in the production of medicines, cosmetics and perfumery. The pharmaceutical industry has proven the excellent properties of usnic acid as an antibacterial, antiviral, analgesic, anti-inflammatory agent. Recent studies show that usnic acid also has a strong effect on Helicobacter pylori (destructive), which is the causative agent of gastric ulcers, duodenal ulcers, and gastritis.

European scientists, while studying the umbilical cord and its antimicrobial activity, were able to confirm its activity on such markers as:

It also notes the activity of usnic acid on bacteria such as Propionibacterium acnes, the cause of acne. A total of 29 types of different markers were studied, on 9 usnic acid acts most effectively. In the study, it was determined that bearded usnia can be used in skin-cleansing cosmetics, as an effective care agent, and interestingly, usnia itself will also clean the cosmetic itself.

The composition of the Beard lichen contains a high content of mucilage, which indicates that it is also active in the fight against dysbacteriosis. Mucilages have valuable adsorbing abilities, they are able to perfectly bind toxins in the intestinal tract and remove them from the body. Also, lichen reduces the processes of putrefaction and fermentation in the intestines with its antibacterial properties.

Beard lichen will also help in cases of respiratory diseases, as it has not only an antibacterial effect, but also an expectorant.

Bearded sage also acts on pain-causing microorganisms. It can be used as one of the means in the treatment of lung cancer - of course, as a component of a complex treatment.

Due to its properties, the Beard lichen is popular in the medicine of ancient peoples, currently people are more focused on herbal teas and medicines.

Beard lichen decoctions are used as an antibacterial, anti-inflammatory, antiviral, antifungal and pain reliever. As Beard lichen is a natural antibiotic, it is effective for colds, flu, tuberculosis, pleurisy and pneumonia. Beard lichen will also be useful for the treatment of the upper and lower respiratory tract.

Along with hard herbs, Beard lichen is also used to treat bronchial asthma. It is effectively used in cases of angina and hypertension, diseases of the alimentary system, ulcers of the stomach and duodenum, and diseases of the thyroid gland.

Beard lichen is an immunomodulating agent, its decoctions are effective for dysbacteriosis. It also treats the oral cavity (gingivitis and stomatitis). It is also used in the treatment of all types of oncology. Lichen decoctions are also used to treat the excretory system (intestines, ureters).

This lichen is also used in gynecology as a decoction for tampons to treat colitis, vaginitis and cervical dysplasia.

Externally, Beard lichen is used to clean purulent scars, and it will also help with trophic ulcers. In surgery, it is also used in traumatic osteomyelitis. Will help heal 2nd and 3rd degree burns. It will help to care for the skin if boils, cracks or fungal diseases appear on it.

Who should not use Beard lichen?

If it has so many effective properties, then there are also a couple of recommendations when not to use it, it is of course an allergy to some substance in the composition, and it would also be undesirable during pregnancy and lactation. It is not recommended for people with high stomach acid. For people who are sensitive to iodine and small children.