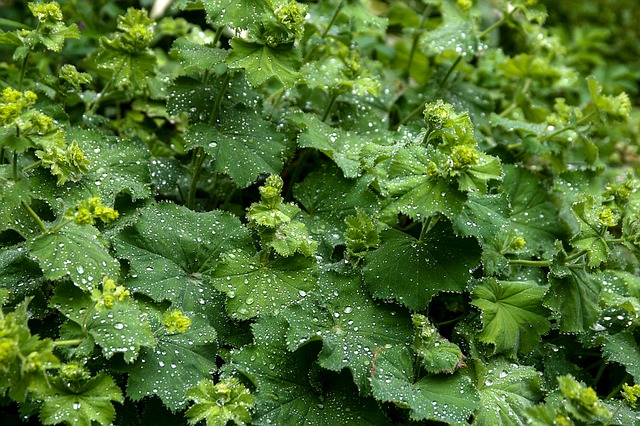 At the outset, I will mention that there is no such plant as alchemilla vulgaris, but this name has been kept for the convenience of people. Due to biological characteristics related to the plant's ability to reproduce, it has countless variations. Above all, only specialists can distinguish them.

Lady’s-mantle is a perennial plant of the rose family. With one or more stems that rise during flowering. The plant has a thick, horizontally growing root. The plant is on average 30 cm tall. The pages are folded with robots in the margin.

The plant has a special structure that provides the opportunity to keep the morning dew on the leaves and, even more interestingly, to remove moisture from the edges of the leaves in the form of droplets after wet nights, which is provided by specific glands in the plant.

The plant can bloom twice a year, the first time it begins to bloom in June, again in September. Towards the end of August, the plant ripens its seeds. The plant reproduces with the help of seeds and roots.

The whole plant, rarely the root, is harvested for medicinal purposes.

The Lady’s-mantle has not yet been fully investigated, but it is known that the above-ground part of the plant contains many valuable substances. Tannins (7.2-11.3%), catechins, flavonoids, phenolcarboxylic acid and its derivatives (luteonic acid and ellagic acid), lignin, lipids, coumarins. The leaves of the plant contain less tannins (2.5%), but at the same time they contain up to 210mg% of vitamin C. Various parts of the plant also contain iron, boron, manganese, copper, zinc, molybdenum and nickel.

The plant can only be harvested during its flowering period, from May to September, but the plant must be in bloom.

Professors have found phytosterols (steroids) in Lady’s-mantle that stimulate the production of progesterone. It is useful to use in cases of menstrual cycle disorders. The steroids in the plant regulate the metabolism, normalize the functioning of the heart vessels and muscles and strengthen the body's immune defenses. As a result of the experiments, it was determined that preparations containing Lady’s-mantle had a strong effect against influenza viruses due to the flavonoids present in the plant and its chemical composition. The flavonoids in Lady’s-mantle are a powerful antioxidant.

The sedum has a beneficial effect on the heart muscle and is one of the effective means of preventing heart attack. The coumarin in the plant will help heal even hard-to-heal scars.

Thanks to the fact that Lady’s-mantle contains a lot of biologically valuable substances, it is really able to help a person maintain health, it is able to stop internal bleeding, increase the amount of milk, treat wounds, create a choleretic effect, act as an anti-inflammatory agent, create a detoxification effect, strengthen blood vessel walls. Antitumor effects are also attributed to the plant.

Side effects from this plant are noticeable only if it is overdosed and used long-term in large doses.

The usual race chair for women

Women have been using the Lady’s-mantle widely and for a long time. Medicinal value and side effects of Lady’s-mantle preparations in gynecology have been known and unquestioned for a long time. Biologically active substances of the plant affect the hormonal background of a woman, normalizing it, stabilizing the functioning of internal organs, relieving fatigue, relieving headaches. All these properties help to overcome climacteric attacks.

For women who are mature enough to give birth to children, doctors recommend using common Lady’s-mantle to prevent infertility and any problems with the menstrual cycle. For pregnant women, preparations of Lady’s-mantle are used to speed up and facilitate childbirth, as well as if the placenta is incorrectly positioned. After childbirth, this plant is used to increase lactation.

In addition to the use of ordinary sedum internally, it is also used externally in gynecology. It is used to treat white flowers, itching of the genitals, inflammations, and also helps with erosion. Women who are not allergic to this plant are advised to do internal rinsing and baths. For this, 3-4 tablespoons are poured with boiling 200-300ml of water and cooled to room temperature.

This plant is useful not only for the beautiful, but also for the stronger sex. The effect of the plant on men is still being studied, but there is an assumption that it increases men's endurance in heavy loads, as well as increases muscle mass and reduces the amount of fat. Folk scientists recommend using this plant to treat prostatitis, but then this plant must be used throughout the year. In summer, when the plant blooms, the leaves should be used fresh - added to salads, soups.

A normal high chair is used for children after 2 years of age. As I have already mentioned, the plant has an effect on the treatment of various diseases. This plant is also useful for children as an expectorant in case of bronchitis. This plant will also be irreplaceable for young people who have problems with acne on the face - wash the facial skin with its extracts.

The Lady’s-mantle is also used for the treatment of various diseases, regardless of gender and age. It is used for various medicinal purposes, as a diuretic, anti-inflammatory and wound healing agent. Common Lady’s-mantle is used as a decoction for the treatment of bronchitis, bronchial asthma and other respiratory diseases. This plant is also used to treat pulmonary tuberculosis, as an expectorant and anti-inflammatory agent.

Lady’s-mantle is also widely used to treat inflammation of the gallbladder and liver. Plant compresses, applications and even as a rinse are used to treat eye diseases, nasal diseases, including strong runny nose and nosebleeds. Gout and rheumatism can also be treated with this plant.

Lady’s-mantle is an excellent anti-bleeding agent, especially for uterine bleeding.

It is widely used in case of inflammation of the digestive tract and to stop diarrhea. A decoction of the leaves will help relieve pain in the heart, as well as in case of anemia.

Tampons soaked in a decoction of Lady’s-mantle are used to treat hemorrhoids. Decoctions are also used to treat rickets and various constipation in children.

It is not recommended for pregnant women, mothers who breastfeed their children to use the drug of Lady’s-mantle , even though Lady’s-mantle increases the amount of milk, before using it for this purpose, consult a doctor, because this plant can cause an allergy to the baby. And, of course, if there is an intolerance to the plant.

For the treatment of infertility: prepare a dry drug mixture of common Lady’s-mantle , peppermint and rowan, in proportions 1:2:1. The tea is drunk several times a day, pouring one tablespoon of the mixture with a glass of boiling water.

For the treatment of painful periods: pour boiling water over 1.5 dessert spoons of Lady’s-mantle drug and leave for 2 hours. Separates the thickness, drink 100ml several times a day.

In case of bronchitis: 30 gr. dry drugs are poured with 1000 ml of warmed wine and left for 12 hours. Use 50 ml in the morning, during the day and in the evening.

Lady’s-mantle tea: pour 2 teaspoons of dry drug with 250ml of boiling water, leave for 7-10 minutes. Drink as a tea 2-3 times a day to improve and stabilize a woman's cycle.

Settling of the rastule: pour 4 teaspoons of the drug with a glass of boiling water (you can use a thermos), let it sit for 4 hours and separate the layers. It is used 2-4 times a day half an hour before meals to prevent painful periods and overcome climax. This setting can also be used for rinsing.

Sterilization of the leaves of the rasskeuliina: pour 40 grams of the drug with 1L of boiling water, let it sit for 10 minutes, separate the thicknesses and squeeze them out. The setting is used in baths to treat white flowers, can also be added to baths (36-37C) to treat skin inflammation and anti-cellulite compresses.

The young shoots and leaves of the plant are used in food, used in salads and soups. Only new and unopened leaves should be collected. The plant is also often prepared for the winter, as an addition to the first and second dishes. It is only important to remember that the plant must be dried properly, not exceeding 60C (permissible temperature for food purposes). The plant can be pickled in the same way as cabbage, together with other plants and vegetables.

It is good to know that the warmer the weather and the older the leaf of the plant, the more tannins it contains, so the plant becomes bitter.