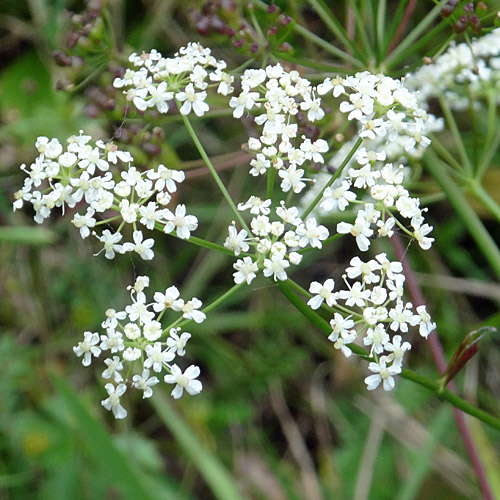 Burnet-saxifrage is a perennial plant that reaches up to 60 cm in height. It is characterized by an erect and bare stem, it is hollow, covered with a small down and topped with a beautiful floral shield. The leaves are located on the underside of the stem, they are split, on long stalks, serrated along the edges, there are also solitary oval leaves. The leaves vary in size as they are closer to the soil as they are larger.

The flowers are small, but in large numbers - white or soft pink. Flowers in clusters of 5-12 pieces, bloom from June to November. The seeds ripen from August to December, they are light brown in color. Reproduces only with the help of seeds.

The root of the Burnet-saxifrage is medium-sized (up to 2 cm in diameter), spike-shaped. Dark brown in color, reaching a depth of 20 or more centimeters.

In traditional medicine, the root of the Burnet-saxifrage is used, which is dug in September-October. Use only large and mature plants with a fully developed root system. The roots are dug up, rinsed in running water and spread out to dry. Dry the root in a shady place spread on sieves. The root of the plant has a spicy-sweet taste and a strong smell. The root of the Burnet-saxifrage is stored in a closed container and chopped just before use. The drug can be stored for 3 years.

In order to preserve the stand, 1/5 of the plants should be left after harvesting so that they can multiply again in the new season.

The leaves and stems are collected in May, until the plant begins to flower. It is spread in a shady place on sieves and allowed to dry (in fresh air).

The seeds of Burnet-saxifrage are collected in autumn, when they are already fully matured. Ready seeds are light brown in color, to get the seeds, cut off the whole chemer and dry it. When drying the seed pods hanging, it is good to lay a cloth on the bottom on which the seeds will fall. Seeds can be stored for up to 2 years in a dark place, preferably in a clay container.

Furocoumarins, saponins, bitter substances, resins, gums, tannins, sugars, coumarins, vegetable fats and essential oils, benzoic acid and acetic acid have been found in the roots and rhizomes of the plant.

The surface part of the plant contains 32% fiber, 11% protein, 2.6% fat. There is also carotene and vitamin C. The taste is not pronounced, a bit harsh, refreshing and a little astringent, the taste "opens up" gradually.

Burnet-saxifrage is used as an anti-inflammatory agent to treat bronchitis, laryngitis, angina, pneumonia - it is prepared both as a decoction and as an infusion. The plant helps reduce temperature, promotes expectoration, increases sweating, reduces fever and has an astringent effect. An extract of mountain hornbeam alcohol can relieve hoarseness within a few minutes. Fresh juice will help cure a runny nose.

Burnet-saxifrage helps to get rid of edema and what is great - it helps to prevent the recurrence of edema, it also improves the functioning of the urinary organs. With long-term use of this plant, it acts as a strong diuretic, which helps to remove sand and stones from the kidneys and bladder.

The plant helps with gastritis and constipation, improves the functioning of the digestive tract and increases appetite. Eating its fresh leaves improves intestinal peristalsis and reduces flatulence. This plant also has pain-relieving properties that will help ease the condition of internal ulcers and gout.

Burnet-saxifrage also has a calming effect. An alcohol extract helps with fatigue, headaches and anxiety. The painkillers present in the plant will have a relaxing effect and improve well-being in case of severe diseases.

Burnet-saxifrage is used in various herbal tea mixtures, which are used to treat burns, hemorrhoids, and skin tears. Rub into the skin as a pain reliever for various joint pains. In many countries, it is used as an antitumor plant and used in oncology.

As usual, Burnet-saxifrage can also cause an allergic reaction. The plant is also not used during pregnancy and lactation, as well as children under 12 years of age. Side effects that may occur if allergic to it: rash, edema, runny nose, difficulty breathing. In case of overdose, photodermatitis appears. When using this plant, you should strictly follow the recommendations for therapeutic doses.

In mixtures, this plant is used to treat prostate adenoma or prostatitis.

As usual, Burnet-saxifrage can also cause an allergic reaction. The plant is also not used during pregnancy and lactation, as well as children under 12 years of age. Side effects that may occur if allergic to it: rash, edema, runny nose, difficulty breathing. In case of overdose, photodermatitis appears. When using this plant, you should strictly follow the recommendations for therapeutic doses.

For cough, bronchitis, angina, laryngitis, tracheitis and other inflammations related to the lungs and throat, a decoction of the rhizome is used. It has anti-inflammatory properties and promotes expectoration. Take 10 gr. dried rhizome and sprinkle with a glass of cold water, leave for 8 hours. Separate the layers and pour a glass of boiling water over them for 15 minutes. Separate the layers again and you have a medicinal product that you take ¼ cup before each meal. You can add honey to improve the taste.

A decoction of the rhizome of the Burnet-saxifrage can also be used as a sedative, it will help to calm down and normalize blood pressure. One tablespoon of root powder is poured with a glass of boiling water and left for 30-40 minutes. The obtained solution is drunk 3-4 times a day for one tablespoon.

To strengthen immunity and as an anti-inflammatory agent, a decoction of the leaves of the sedge is used. The dried surface part of the plant is sprinkled with water in the proportion of 50 gr. on 200ml of water, boil on a low flame for 10-15 minutes and then let it cool, at least an hour. For the decoction, separate the thickets and drink 100 ml each before eating. Such a decoction will also help with upper respiratory diseases, bladder stones and cystitis.

The alcohol extract of the Burnet-saxifrage is an antiseptic, pain reliever and immune system stimulant. It is prepared from the root of the plant and vodka (40%). 0.5 L of vodka is needed for 100 g of rhizome. The extract is prepared in a glass container, placing it in a dark place for at least 10 days. It is recommended to shake the extract from time to time. Use it 3 times a day after meals for 30 drops.

You can also use the juice of the fresh leaves of the Burnet-saxifrage to get rid of runny nose. Fresh juice is instilled in the nose 3-4 times a day for 3 drops. It will help to remove swelling, improve blood circulation and relieve inflammation.

The plant is mainly used as a spice. Its seeds are a complete substitute for cumin and anise. The leaves are a bit tough, but pleasant in taste. The young leaves and rhizomes are added to salads and soups. In ancient times, it was also used as an additive to sausage. The plant is used in egg dishes, pilaf (seeds), fried and boiled fish. Burnet-saxifrage is especially tasty together with tomato.

The surface part of the plant and the seeds are added to various drinks to give them a golden color and a pleasant smell. The roots are put in vodka so that it gets an interesting smell and an equally interesting color - blue. Inflorescences, similar to dill, are put in cucumber, tomato, squash marinade.