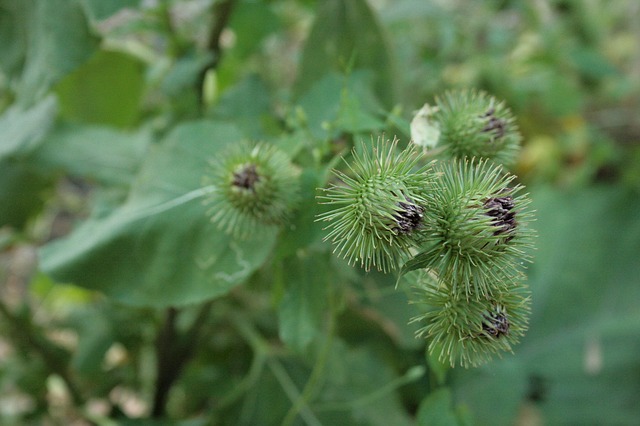 The large burdock is a biennial plant, 60-180 cm in height. It has a sparsely branched root system. The root is fleshy, reaching a depth of 60 cm. The stem is grooved, straight, strongly branched at the top. In the first year, the plant forms a rosette of root leaves. In the second year, it develops upright stems with subordinate, flat-ovate, gray-velvety leaves from the underside. The flowers of the big burdock are purplish-violet, tubular, bisexual, in bulbous baskets (3-4cm in diameter). The big burdock blooms from July to August, the fruits ripen in August-September.

For medicinal purposes, the fleshy roots of the big burdock are used, from the first year of the plant, they are dug in September-October. The roots are rinsed in running water, then they are cleaned from the leaves and cut into pieces of 10-15 cm. The roots are dried in the fresh air, or in well-ventilated rooms, if necessary, drying is completed in forced dryers at a temperature not exceeding 40-45C. The leaves of the plant are also often collected, they are prepared in July-August, dried in the shade or in well-ventilated rooms. The seeds of the plant are collected at the moment of their ripening.

The roots of milk thistle contain up to 45% inulin, burdock essential oil up to 0.17%, as well as palmitic and stearic acid, sitosterol and stigmasterin, tannins, bitter substances and fatty substances. Mineral salts, sugar, organic acids (caffeic acid, malic acid, citric acid), group B vitamins, proteins (up to 12%), especially high content of ascorbic acid. Glycoside arctin and vegetable fat (up to 20%) are found in the seeds; in the leaves - essential oils, tannins, ascorbic acid and carotene.

Preparations from large burdock promote rapid tissue regeneration, have a choleretic, bactericidal, anti-diabetic effect, as well as normalize the functioning of the digestive tract. The roots of the plant are used as a diuretic, in case of kidney diseases and edema. They can be successfully used as a temperature-reducing, sweat-repelling agent, in case of a cold caused by an infection. They are also used to treat gout and joint rheumatism. Externally, the roots of the plant are used to treat skin diseases.

In folk medicine, burdock root is used in poultices, decoctions and extracts. An extract is often prepared in oil - used in case of ulcers, burns, bedsores; extract in pig fat - in case of eczema, acne, urticaria, furunculosis, scabies, burns, snake bites and bee bites. A decoction of rhizome oil is used to treat burns, wounds, frostbite, hair loss, and dandruff.

A decoction of the harvested leaves is rarely used to treat gastric and duodenal ulcers, kidney and liver stones. Fresh leaves can also be used fresh - by crushing them and putting them directly on top of burns, ulcers, wounds, bedsores and tumors. Decoctions of leaves and inflorescences are used for baths - in case of gout and rheumatism, and as compresses in case of joint pain.

A decoction of burdock seeds will be very useful in case of chronic constipation.

It is often believed that burdock should not be used by pregnant and lactating women, which is fundamentally wrong. The large burdock is one of the rare plants that does not cause side effects. This belief is due to the fact that large burdock is rarely found alone, but is used in various mixtures with other plants that also cause side effects. Of course, if you do not feel safe about the use of this plant, you can inquire about it with the attending physician.

Decoction of burdock roots: 10 grams of the drug is placed in an enameled container and poured with 200 ml of hot, pre-boiled water. Close the cap and put in a water bath, stirring often for about 30 minutes, cool at room temperature for 10 minutes, squeeze out the thickets. The obtained decoction is supplemented with boiled water up to 200 ml. The resulting decoction is stored in a cool place for no longer than 2 days. Use ½ cup warm, 2-3 times a day.

Preparation of the root of the great thistle: pour 10-25 grams of the crushed drug with 400 ml of boiling water, keep it in a thermos for 1 hour, then separate the thick parts. Take ½ cup warm, 3-4 times a day after meals.

Big thistle oil: the crushed roots are placed in almond or olive oil for a couple of days. If used for hair, you can also add hot pepper.

Steeping the leaves of the big burdock: pour 60g of the drug with 600ml of boiling water, let it steep for 4 hours, then separate the layers. Use 1 glass, 3 times a day.

Decoction of burdock leaves and inflorescences: boil 20 grams of the drug in 200 ml of water for 5 minutes. It is used for compresses and baths.

Burdock root improves hair growth. A decoction of the roots is prepared for this, which is used long-term, every day, wetting the scalp with it. Fill 1/3 of a small pot with burdock root and cover with water, almost to the edge of the pot, cook on a low flame for 30-40 minutes, separate the thickets. Such a decoction can be stored in the refrigerator for no longer than 5 days. Use as needed, warm up a little before use.

Solution for internal use: pour 2 tablespoons of burdock roots with 500 ml of boiling water - a daily dose.

Burdock preparations are good cleansers with antioxidant properties. Root decoction removes not only excess salts, slags and toxins from the body, but also substances such as mercury compounds. Pour 10g of dried crushed root with one glass of hot water, boil for 15-20 minutes, separate the thickets, add the decoction to the original volume. Use 1 tablespoon, 3-4 times a day.

In case of sharp pain in the stomach, a decoction of the plant or its juice is used: 1 tablespoon per 1/3 cup of warm water.

In case of constipation, a decoction of burdock seeds helps: pour a handful of ripe seeds with 1 cup of boiling water, boil for 2 hours, separate the pulp and drink in one go.

In case of cholecystitis, gallstones, chronic pancreatitis, drink a decoction of the roots: 20 grams of dry crushed drug per 1 glass of water, boil for 30 minutes, let it rest for 20 minutes, separate the thickness, add to the original volume. Take 1-2 glasses 3 times a day before meals.

To reduce fever: 4 tablespoons of dried burdock root in 4 cups of water, boil until the volume of water is reduced by half, separate the thickets. Add 2-3 tablespoons of honey to the decoction. Use 1 glass, 3 times a day after meals.

Rinsing agent, in case of stomatitis: 1 tablespoon of dried burdock root per 1 glass of water, boil for 15 minutes, let stand for 1 hour, separate the layers, add to the original volume.

In case of dislocations and sprains, compresses are made from burdock and placed directly on the painful area, you can also apply fresh burdock root mixed with vegetable oil - which will help even in case of severe bruises and hematomas.

With the large burdock, you can get rid of skin warts perfectly, if you mix its juice with table vinegar and drip it 1-2 drops a day on the wart.

In the case of urinary tract stones, make a decoction: 20 grams of dried roots, pour 1 glass of hot water, boil for 10 minutes and leave for 2 hours, then separate the thickness. Drink ½ glass, 3 times a day.

In case of gout, a local application is made from dry or fresh leaves. They are washed off and placed locally on the painful area in a thickness of 5-6 sheets, covered with compress paper and covered with cloth.

In case of diabetes, a decoction of burdock root is used, 1 tablespoon, 3-4 times a day: pour 10 grams of dried drug with a glass of water, boil for 15-20 minutes, let it rest for 30 minutes, separate the thickness, add to the original volume.

To treat rickets, a root decoction is used, warm for 2 tablespoons, 2-3 times a day before meals. (1 tablespoon per 1 glass of water, boil for 30 minutes, cool for 10 minutes, separate the layers and restore the volume).

Burdock roots can be used fresh as an ingredient in salads. It should be noted that the fluffy burdock is significantly more bitter than its other brothers. Most often, the large burdock is cultivated, because its parts are the most pleasant in taste.

The dried root can be ground and added to the flour used to bake bread. Likewise, the root can also be roasted to obtain a powder similar to chicory, which can be used as a coffee drink.

The leaves can be boiled or used in dishes, like a spinach-like plant. However, the leaves are very fluffy and this spoils the whole pleasure of eating them, so it is best to use them in dishes where the leaves have to be chopped. Their stems are tastier than the leaves, they are much meatier and juicier. It is recommended to peel the base of the leaf stems, then you can add them to soups, salads, stews and anything else you can imagine.

Wash and rinse the leaves in boiling water for 1-2 minutes. Dry and grind. Mix with chopped onion, salt, add horseradish and cream.

Cleaned, cut potatoes and rice are boiled. Chopped burdock leaves and pan-fried onions are added to the soup 15 minutes before serving.

Grind burdock leaves with a meat grinder, add salt, pepper, dill, sorrel and mix. Place in a 3L jar and store in the refrigerator. It is used as an additive to soups, salads and as a seasoning for meat and fish dishes.

Washed burdock roots are cut into rounds, frozen and baked in the oven or on the fire.

Boil burdock roots in salted water. Then fry on a pan.

Add vinegar to the water and boil. Burdock roots chopped in a meat grinder are added to the boiling mixture and boiled for ~2 hours. Povidla can be used with tea or with other sweet dishes.

The roots are dried and roasted in the oven until they turn brown. Grind in a coffee grinder and use 1-2 teaspoons per cup of boiling water.

Burdock root is used as a natural plant extract - it is a component of many cosmetic products that care for skin and hair. Burdock root has strong anti-inflammatory and antioxidant properties - it consists of tannins, vitamin C and essential oils. It reduces bruises and inflammation, and also regulates seboregulation. Among the most effective compounds found in burdock root are sesquiterpene lactones, which have antifungal and anti-inflammatory properties. The antioxidants in the root effectively suppress the action of free radicals in the body.

This plant will be especially valuable for treating dry, itchy and flaky skin. Traditionally, burdock roots are used to prevent skin rashes, relieve the symptoms of psoriasis/psoriasis, and reduce itchiness and moisturize the scalp. It is worth using burdock root preparations on a daily basis for people who suffer from psoriasis, eczema and dandruff.

Burdock root has not only antibacterial, but also anti-inflammatory properties, which will help prevent skin redness, swelling and irritation in the case of such pathologies as couperosis and rosacea.

Burdock root extract is also useful after insect bites, as well as chemical and thermal burns.

Burdock root extract is one of the best means for hair regeneration - it nourishes the scalp, prevents hair loss, promotes new hair growth, protects the hair itself and gives it shine.

You should know that burdock root can also act as an allergen. Preparations that contain an extract of this plant can provoke contact dermatitis in those who suffer from pollen allergy (pollinosis) caused by plants of the genus St. John's wort. This type of allergy is quite common. Therefore, it is worth checking the allergic reaction of the skin before using burdock!