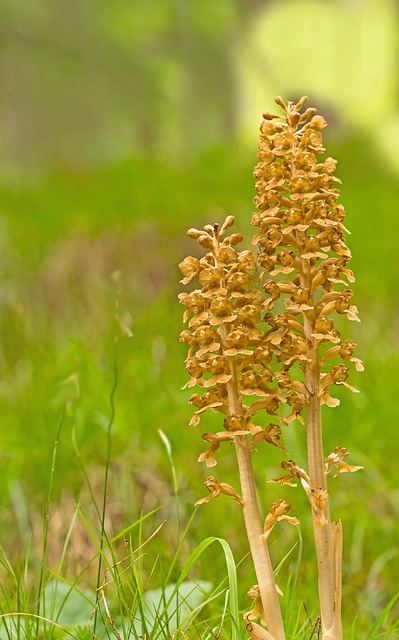 Bird’s-nest Orchid is a perennial plant that reaches a height of 20-45 cm. The plant has a strong rhizome, which consists of many thick roots that branch out radially in all directions. The stems are covered with brownish scales (3-5 pcs.) and there are no developed leaves as such. At the beginning of development, the stems are yellow in color, later they acquire a brown shade. The flowers are brownish yellow, large, aromatic, with the smell of honey, arranged in a long (<20cm) cone-shaped inflorescence. The Bird’s-nest Orchid flower blooms in June-July. Closer to autumn, a fruit forms - a multi-seeded box.

A normal nestling is a saprophyte (mycotroph) that does not contain chlorophyll. The seeds develop in the soil in a fungal symbiosis. During the first years, when the nestling has grown, the roots develop slowly, in the sixth year of life there are only 4-5 internodes. For 9-10 years, a surface shoot grows from the rhizome. The stem lives only for 2 months and then it withers.

The plant reproduces by means of seeds and vegetatively. After the seeds ripen, the rhizome dies, but the roots develop buds that give rise to new plants. Sometimes, the flowering of the nestling does not occur because it is not able to break through the ground surface, in such cases the flowers tend to develop in the ground surface. Self-pollination takes place and the seeds begin to grow straight from the seed box.

The above-ground part of the plant (stems, flowers) and roots are collected for medicinal purposes. The surface part is harvested during the flowering period of the plant (June-July), the roots are dug in autumn. The roots are carefully cleaned of soil and impurities, then rinsed in running water. Dry the roots in forced dryers, not exceeding 50C. Dried drug is stored in cloth or paper bags for no longer than 2 years.

The above-ground part is cut with gardening shears or a knife, only healthy plants are selected. Spread the plants in a thin layer on the sieves, not thicker than 5 cm, often stirring the drug so that it does not start to rot. A thoroughly dried plant is stored in paper bags for no longer than 2 years.

The chemical composition of the Bird’s-nest Orchid is practically unexplored. However, alkaloids and coumarins, glycoside loroglosin, as well as some organic acids have been found in the surface part and root of the plant.

The medicinal importance of Bird’s-nest Orchid is related to the alkaloids, coumarins and glycosides loroglosin contained in it. Sedative, pain-relieving and anticonvulsant properties have been tested experimentally. The alkaloids present in the plant act as antihelminthic agents and also have bactericidal properties. Coumarins inhibit blood clotting processes, accelerate wound healing.

Medicinal products based on Bird’s-nest Orchid can be used to treat suppurating and non-healing scars.

Ointment from the crushed rhizome is used to treat hemorrhoids. Crushed aerial part of the plant or root helps relieve toothache and is used externally to heal wounds, cuts, burns and ulcers.

It is not recommended to use this plant if you are prone to allergies. As well as during pregnancy and lactation. This plant is not used for small children.