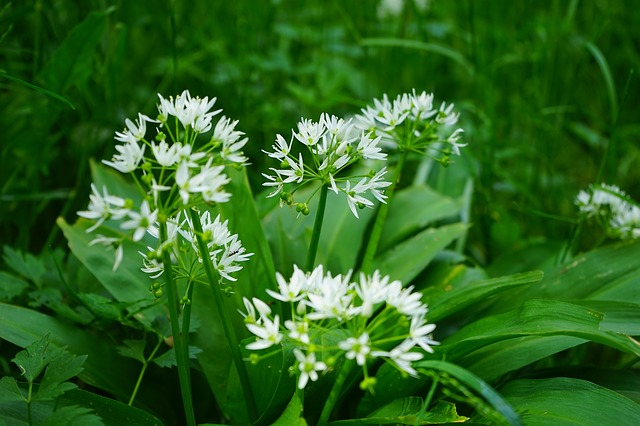 Ramsons is a perennial plant with a strong garlic aroma. The bulb plant has an elongated shape. Ramsons stem without leaves, up to 40 cm tall. Leaf roots in a rosette, elliptic-lanceolate, similar to lily of the valley leaves, on petioles, 2-3 leaves on each plant. The flowers are regular, bisexual, small, white-green, arranged in a corymbose inflorescence. The plant blooms in June-July. Fruits - boxes with small, black seeds, ripen in July-August. The plant reproduces by seeds and bulbs.

The stems and leaves are harvested before the plant has started to bloom (May, early June), the bulbs are harvested after the seeds have matured. Basically, this plant is used for food, both fresh and pickled, and as a spice. Young leaves, stems and onions are used in salads, often onions are also dried and ground into powder - further used as a spice.

Thanks to the chemical composition of the plant, it stimulates the activity of the digestive tract, has a beneficial effect on blood composition, cleanses the skin, helps against colds, strengthens the immune system, helps improve the functioning of the cardiovascular system, accelerates metabolism, and is characterized by a pronounced bactericidal effect.

In fresh form, Ramsons is recommended for the treatment of hypertensive diseases, thyroid diseases, hypo- and hyperthyroidism, atherosclerosis. It is useful for vitamin C supplementation as well as an anthelmintic. Ramsons drops juice in the ears, in case of purulent inflammations. Externally, alcohol extracts of Ramsons are used to treat cough and rheumatism. Crushed Ramsons leaves and juice are successfully used in the treatment of various skin diseases, especially scabies and skin carp.

Scientists of folk medicine still recommend using Ramsons extracts in case of fever and rheumatic pain, by rubbing them externally.

Ramsons can also be used in case of diabetes, mainly it is used during the diabetes diet.

Ramsons is not recommended for use during pregnancy and lactation, and care should be taken when giving it to young children. It is not recommended to give the plant to people suffering from pancreatitis, hepatitis and cholecystitis.

It is good to know that Ramsons growing in the wild is included in the Latvian Red Book.

Keep Ramsons leaves in boiling water for 2-3 minutes, chop them, put them on pieces of boiled meat. Add spices and a chopped egg.

Cool the boiled fish. Ramsons mon is ground in a meat grinder, spices are added, mixed and used as a side dish for fish.

Boil a cut potato for 10-15 minutes, add fried onion and carrot, 10 minutes before the soup is ready, add chopped Ramsons and spices.

Boil Ramsons for 5 minutes, drain on a sieve, cover with cold water and put in the refrigerator for 1 hour, add vegetable oil and serve as an independent dish or as an addition to fish and meat dishes.