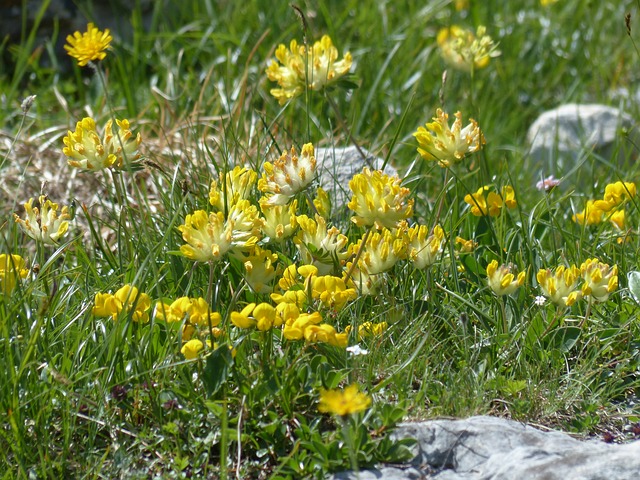 Kidney Vetch is a biennial (often perennial) plant from the tawny family, which grows no higher than 45-55 cm. A strongly branched rhizome, it would be a columnar rhizome, from which smaller roots go in all directions. The stems of Kidney Vetch are downy, leafy, upright, thick and sturdy. Their number tends to vary from 1-6 per plant. Both stems and inflorescences are covered with sparse, short, strongly attached hairs.

The flowers are usually orange, red or yellow. Inflorescences are usually 2-3 at the top of the stem. The plant blooms from June to July, ripens and produces seeds in August. This plant is especially loved by animals as food.

The leaves, stems and flowers of the plant are used for medicinal purposes. All the mentioned parts of the plant are collected during the flowering period - from June to July. The plant is dried by haying it in bundles and hanging it in a shady and well-ventilated room, but it is also often used a method where the plant is chopped and dried on a cotton cloth before drying. Prepared drugs are stored in a dry and dark place, usually in cardboard boxes or glass jars, for no longer than 2 years.

Kidney Vetch contains tannins (tanning substances), flavonoids, vitamin C, saponins, organic acids, minerals and dyes, as well as other substances, including essential oils. Ascorbic acid and carotene are found in the stems and leaves, proanthocyanides (protidelphinidin) and flavonoids (kaempferol, quercetin, geraldol, isorhamnetin, rhamnetin, 5-deoxykaempferol, phytesin, rhamnocitrin, 3-0-kaempferol galactoside, 5-deoxyrhamnocitrin and others) are found in the leaves. The following anthocyanins have been found in the flowers of the morning glory: peonidin, 3-cyanidin galactosoids, delphinidin. The seeds of the plant contain carbohydrates and their related compounds (galactomannan and polysaccharides).

Thanks to the chemical composition of the plant, it also has medicinal properties, they provide the plant with antiseptic, blood-cleansing, wound-healing, anti-toxic and other properties.

For example, the tannins make mullein an excellent astringent, but the tannins and vitamin C, thanks to their bactericidal properties, allow this plant to be used as an antiseptic. At the same time, the flavonoids present in the plant have a beneficial effect on the blood vessels, strengthening blood vessels and healing wounds.

In folk medicine, Kidney Vetch is valued as a valuable plant because of its strong antiseptic and wound-healing properties. Folk healers usually use this plant in combination with celandine - a decoction and poultice containing both celandine and celandine is a powerful aid in the treatment of non-healing wounds, frostbite and ulcers.

Infusions of Kidney Vetch flowers are widely used to treat diseases of the oral cavity - gingivitis, tonsillitis, ulcerative stomatitis. The same infusion can also be used to treat cough.

A decoction of the Kidney Vetch is used to treat epilepsy in children - initially by bathing in a bath in which the decoction has been poured, then giving the same decoction to drink.

By placing a Kidney Vetch on water, it can be used to treat bronchitis, flu and rheumatism. Compresses can be made from it to treat various bruises. Its settings are also used as applications to treat dermomycosis and other skin diseases.

Fresh plant can also be used on various skin rashes, they will be absorbed much faster.

Not recommended to use

Kidney Vetch has no known or any toxic properties. However, regardless of this, it is not recommended to use it medicinally for pregnant women and new mothers who are breastfeeding and, of course, for people who are allergic to this plant.