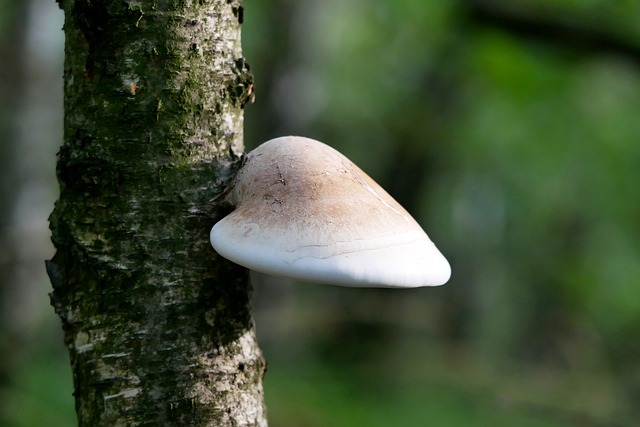 Birch polypore (Piptoporus betulinus) is a saprophyte - it grows on dead birches, rarely on live ones, which soon turn into dead ones and eat them. Piepi can be found from May to October, but if there are warm winters, it can also grow in winter and turn from an annual to a biennial.

In rare cases, the tree grows up to 30 cm in diameter, usually it is 5-20 cm large. Young mushrooms are initially light and whitish, but as they get older, they change their color to yellow-brown and grayish shades. The cap is covered with a thin, smooth, often cracked "skin", which can be easily separated from the mushroom. In the beginning, the birch tree is pillow-shaped, as it grows, it becomes horseshoe-shaped, and at the end of its life, it will become a large slab with an inclined edge. The bottom of the mushroom is white, covered with many pores, from which spore powder falls, white in color. In most cases, this mushroom does not have a stalk, or it is underdeveloped.

Birch polypore (Piptoporus betulinus) is not a poisonous mushroom and is considered edible. However, even though its non-toxicity has been scientifically proven, its use in food is a highly individual measure, because this mushroom has a relatively sour taste and if it is boiled, the acidity only intensifies. Therefore, it is quite difficult to use it as an edible mushroom, but it is safe to use for medicinal purposes.

For medicinal purposes, Birch polypore (Piptoporus betulinus) sap is harvested from early summer to mid-autumn. Only harvest healthy mushrooms that have not been damaged or eaten by insects. Collect only fresh and small-sized mushrooms, the color of the flesh of the fruiting body is white when cut. Mushrooms, like most mushrooms, accumulate harmful substances, so they want to be collected as far away from populated areas as possible. Once you have harvested the mushroom, it needs to be processed as quickly as possible.

Then they are used fresh or dried and ground into powder. To dry it would be spread out on sieves, but it can also be forced in dryers. Birch trees are cut into pieces and laid out on the surface to be dried, in a shady and well-ventilated place, if we use forced dryers, then the maximum temperature is 70C. It should be remembered that pies are very sensitive to moisture, so their storage is allowed only in hermetic containers and away from direct sunlight. You can store it for up to 2 years.

Many bioactive substances have been found in Birch polypore (Piptoporus betulinus). Aliphatic alcohols, ketones, aldehydes, terpenes, aromatic compounds. Six lanostane-type triterpenes, identified as A- and C-type polyporenoic acids. These acids have a pronounced anti-inflammatory effect. They are associated with important life-sustaining, biological processes - cell proliferation, macrophage and lymphocyte migration, angiogenesis, apoptosis and the body's protective function at the molecular level. Piptamine obtained from the fungus has an antibiotic effect against Bacillus subtillus and Escherichia coli. The obtained nucleic acids act as an antiviral agent. Polysaccharides in the mushroom are effective against 180-sarcoma and Ehrlich carcinoma.

In folk medicine, this mushroom is used as a means of strengthening the body and preventing diseases. Piepi cut into slices can be used as a plaster, which will ensure faster healing of the wound thanks to the substances in the composition.

It is important to know that Birch polypore (Piptoporus betulinus) belongs to highly active medicinal products, so it would not be advisable to use it during pregnancy and lactation, as well as for children who have not reached the age of 14. This mushroom should not be used in the postoperative period.

Extract of Birch polypore (Piptoporus betulinus) for oncology prevention: take three tablespoons of dried birch sap powder and sprinkle with 0.5L of brandy. Place the container in a dark place for two weeks. The solids are not filtered, shaking the container before use. The extract is used for one tablespoon 3 times a day. Such a course is continued for 1 month and a break of half a year is made, then the course can be repeated.

Settlement of Birch polypore (Piptoporus betulinus). Fresh and cleaned birch sap is poured with warm boiled water for 5-6 hours. After that, the pies are taken out of the water and ground with a meat grinder. The water in which the pine nuts were settled is heated to 50C and mixed with ground birch pine nuts in a ratio of 1:5 (pine nuts: water). The mixture is placed in a cool and dark place for two days. Separate the thickets and use the obtained solution for 1 glass 3 times a day, it can be diluted with water if it is too strong to taste.

A lighter setting recipe can also be used. Put the cut mushrooms in a thermos and pour hot, not boiling water over them and let them sit for 10-12 hours.

Birch polypore (Piptoporus betulinus) powder can be made by grinding it in a coffee grinder or grinding it with a pestle. It can also be used to cover wounds, burns and other skin damage. To strengthen immunity, the powder is mixed in water or milk and taken in small portions before meals.