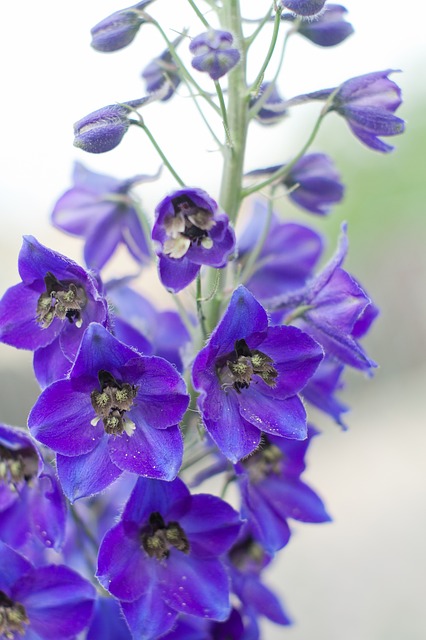 However, the tall Candle Larkspur is very poisonous and, confusing the names of these two plants, sometimes the Candle Larkspur, which is useful for herbal teas and salads, is considered an inedible plant.

Height 1 — 2 m. The stem is erect, hollow, glabrous or the lower part covered with sparse, down-curved hairs. The upper part of the stem with a few short branches. The leaves are petiolate, radially divided into 3 - 7 parts, alternate on the stem. Rhizome short, very strongly formed.

The color of the flowers varies from light to dark blue. Different varieties are also grown for purple, white and stuffed flowers. The flowers are arranged in long bunches on the stem and at the ends of the branches. Sepals 5, of which the upper one forms a long spike. Petals 4, of which the upper two form pinnae, and the lower 2 are free, elongated.

The plant blooms in July and August, the seeds ripen in August-September.

It is good to know that the plant varies a lot in terms of its appearance - the split of the leaves, etc

For drugs, the entire surface part of the plant is collected, the flowers are often used separately from the rest of the plant, but can also be used together. Harvesting began during flowering. When harvesting the plant, it is cut on average 5 cm above the root. The plant can be dried in different ways - hung or laid out, in well-ventilated and shaded rooms, as well as in dryers not exceeding 50C. When drying grass in a laid out form, it should be turned to the other side every day so that no effusions form and mold does not appear. Stems without leaves 40-70 cm long, as well as flowers, are used for treatment. The smell of ready-made drugs is weak, it is not recommended to taste it, because the plant is poisonous. The plant is stored in cardboard boxes or bags. Drugs should be stored loosely, without pressing them in any way. The drug can be stored for 2 years, after which all its valuable properties disappear.

It should be noted that replanting the plant in the same place is possible only after two years, giving the plant a chance to recover. In order to avoid poisoning, it is recommended to collect the drugs in thin rubber gloves and then wash your hands thoroughly - during collection, if your hands are not washed, do not make lunch time!

All parts of the Candle Larkspur contain alkaloids. More than 40 different alkaloids have been found in the plant, which bind to isoquinoline (delpheline, condelpheline, elatine, delateine, methyllycaconite, edolenine, curarine, tubocuranine, toxiferine, delsemine, mellictine, glycoalkaloid delphinidine and others); in roots up to 4%, in seeds up to 2.5%, in grass up to 1.3%. The surface part of the plant also contains trace elements: potassium, calcium, magnesium, iron, manganese, copper, zinc, cobalt, molybdenum, chromium, aluminum, barium, selenium, nickel, strontium, lead, concentrated strontium, molybdenum, selenium, and the plant also contains flavonoids and other substances.

In pharmacology, this plant is valued precisely because of its chemical composition, mainly because of the high content of alkaloids, which have a therapeutic effect - it reduces tension in nerve and muscle tissue, evenly lowers arterial blood pressure, and also blocks the apparatus of nerve endings, causing relaxation of skeletal muscles, so complexes with other preparations this plant is used in surgery, as an anesthetic to treat brain injuries, spinal cord injuries and the like. Candle Larkspur preparations also have a pronounced antimicrobial effect, have an analgesic effect and promote faster healing.

Folk medicine has recognized Candle Larkspur since ancient times. In ancient times, this plant was used mainly in case of bone fractures (that's why the Russian people call this plant – živokost), making compresses from it and using it locally. Therefore, this plant has not yet lost its popularity in the medicine cabinets of folk healers. The tall Candle Larkspur is able to restore damaged tissues, so its decoctions can also be used in case of burns.

In folk medicine, this plant is used as an analgesic, blood-stopping, anti-inflammatory, diuretic, anti-fever, expectorant, anti-parasite (seed) agent. Decoctions and infusions are useful for the treatment of fever, colds, for the prevention of pathologies of the digestive tract, syphilis and tumors. It also treats pneumonia, pleural inflammation, migraines, panic attacks, women's diseases, hyperbilirubinemia, urinary bladder diseases and many other ailments. It is also often used to treat hypertonia, conjunctivitis, pathologies of respiratory organs and skin.

It is good to know that the tall Candle Larkspur (stems, leaves, seeds and roots, not counting the flowers) contains a lot of alkaloids, including powerful indes-diterpenes. Therefore, in folk medicine, this plant is treated with increased attention, because with a slight overdose of this plant, the substances contained in the plant can cause CNS paralysis and stop the respiratory center.

As a poisonous plant that relaxes the skeletal muscles, high doses can cause paralysis of various muscles. It damages the cardiovascular system and the gastrointestinal tract.

Remember that all parts of this plant are poisonous!!! In the case of using the plant, special care must be taken to avoid severe poisoning.

Decoction of the surface part of Candle Larkspur: take 20-30 grams of drug per 1L of boiling water, bathe in warm water for 5 minutes, let it sit for 15 minutes, separate the thickets. Replenishes the volume to the original volume. Drink ¼ cup, 3 times a day for diseases of the female line, diseases of the bladder, enlarged liver, digestive tract, whooping cough. The decoction is also used to rinse the throat, in case of throat diseases.

Candle Larkspur: used orally as an anthelmintic. One dose is 3 seeds.

Decoction of Candle Larkspur root: take 1 teaspoon of roots or herbal drug for 1 cup of boiling water and boil for 20 minutes on low heat. Use 1 tablespoon, 3 times a day - in case of hernia, burns, jaundice.