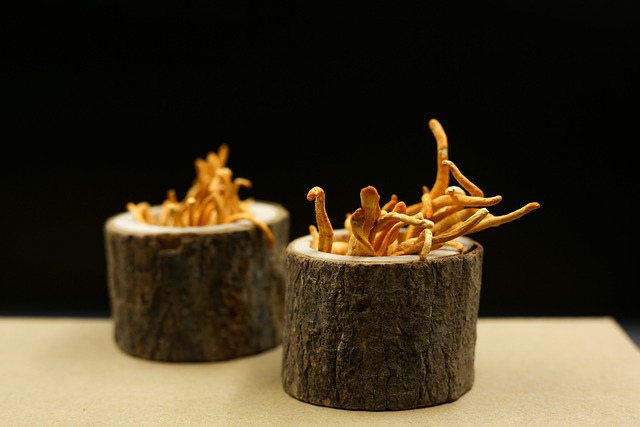 The fruiting body of Trooping Cordyceps has a complex shape. 2-6cm tall and 3-10mm wide, top orange, orange-red, rarely purple, mace-shaped. Fruit bodies are formed from a dense mass of mycelium, which is located in the body of the host. The lower part of the fruiting body is smooth, lighter, from whitish to orange-red.

The pulp of the fruiting body is white, fibrous, without distinct taste and smell. The mushroom is very variable - it is related to living conditions.

Trooping Cordyceps is a parasitic fungus that chooses caterpillars, ants, flies and underground fungi to parasitize. Once the spores reach the victims, they develop, killing the host. The Trooping Cordyceps chooses butterfly larvae, rarely others, as its victims.

The therapeutic effectiveness of Trooping Cordyceps is ensured by the cordycepin, mannitol, adenine, adenosine, peptides, polysaccharides and other microelements contained in it. For example, mannitol removes free radicals from the body, acts as an antioxidant, reduces cell aging and promotes the body's ability to regenerate cells.

From the mycelium of this mushroom, various nutritional supplements are prepared, which are used to activate the immune system and promote cell regeneration processes.

Cordycepin has an antibiotic effect. This is the substance that ensures that bacteria do not form and decompose in the bodies of the victims of the world's giants.

Trooping Cordyceps has gained huge popularity in the world, which grows high in the Himalayas. Its price reaches 25,000 euros per kilogram. Unfortunately, these preparations are often falsified and sold under the same name by poisonous mullein species. Which will not only contribute to poisoning, but will cause damage to the body. Therefore, it is more practical to collect war milneni yourself as an alternative to the popular Himalayan mushroom (Cordyceps sinensis). You will be safe, for the collected!

The above-mentioned medicinal properties were determined by scientists and are based on research results.

Mushrooms are collected in autumn, but they are not very common in Latvia, but there are seasons when they can be collected in quite decent quantities. It is used fresh, cooked extracts and mushroom powders.