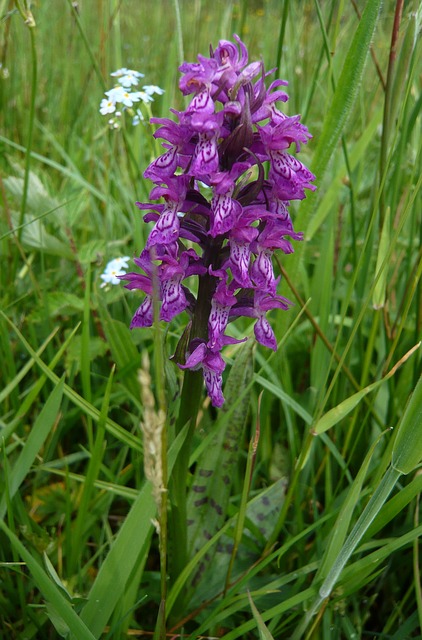 Marsh-orchid is a perennial plant, with a 4-7-parted gum, which is laterally compressed. The length of the stem is 30-75cm, it has 3-5 leaves at the base. The leaves are elongated, linear, 20-25 cm long, spotted. Inflorescence thick, cylindrical, many-flowered, 6-15 cm long. The flowers are lilac pink, sometimes soft pink and rarely white.

Fruit - a multi-seeded box with small seeds. The plant blooms from May to July, the seeds ripen in July-August.

Marsh-orchid collect the young gums at the end of flowering. They are cleaned from the soil, rinsed in running water, wrapped, put on a string, then immersed in boiling water for 3-5 minutes and then dried by hanging in a shady and well-ventilated place. Dried gums become almost transparent.

The fruits of the roots of the Marsh-orchid include mucilage (47-50%), which consists of the high molecular polysaccharide mannan, starch (27-31%), dextrin (<13%), pentosan. The aerial part of the plant contains the glycoside loroglosin. Sucrose, bitter substances, essential oil, proteins and other equally valuable substances were also found in the Marsh-orchid.

Dried gums can be used as coating, anti-inflammatory and strengthening agents, which can be used for acute and chronic diseases of the respiratory system, as well as in case of inflammation of the digestive tract (effective in case of bronchitis, gastroenteritis, colitis and stomach ulcer). The dried gum preparations of the Marsh-orchid do not allow harmful substances to be absorbed in the digestive tract, so they are often used in case of poisoning. The mucilage of the plant is used orally and in the form of enemas.

Dried gums are useful in case of exhaustion of the body caused by long-term bleeding, physical and mental overload, tuberculosis, etc.

The dried gums of the plant, apart from their medicinal effects, also have a high energy value. It is recommended to use it in the form of a drink or gel - after operations and in case of long illnesses.

The leaves of spotted foxglove have wound-healing properties.

In folk medicine, decoctions and extracts from young gums are used as a tonic and are also recommended for use in cases of impotence, nervous diseases, mental disorders and as a pain reliever for malignant tumors. It is also used as an expectorant and diuretic. Powder from old rubber was used by folk scientists as a contraceptive and abortifacient.

Leaves and gum evaporated in milk are used externally to treat various lacerations, boils and carbuncles.

The seeds of Marsh-orchid are used to treat epilepsy.

Marsh-orchid decoctions are used to treat inflammation of the mucous membranes of the digestive tract, as well as to treat stomach ulcers and recover from dysentery.

The mucilage substances in the plant protect the digestive tract from the effects of food, providing anti-inflammatory properties. These properties are particularly well observed when treating children, after long-term and debilitating illnesses.

Gum root is useful for chronic diseases of the upper respiratory tract, inflammation of the oral cavity and throat.

Along with other plants, the gum of Marsh-orchid is used to treat impotence, premature ejaculation and is also used as an aphrodisiac.

The dried gum can also be used as a remedy for chronic diarrhea, as well as helping with indigestion and treating gums.

The Marsh-orchid can be safely used for medicinal and food purposes, it has no side effects and no age restrictions. Only treated rubbers should be carefully monitored as they tend to rot.

It is not advisable to use this plant together with tannin-containing or other astringents.