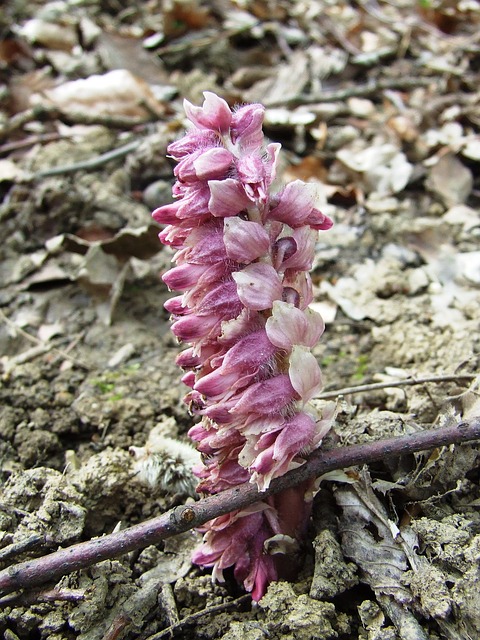 Toothwort grows up to 30cm high. Their stems are covered with disfigured, chlorophyll-less leaves, they are fleshy, pale, oppositely arranged scale-like leaves, hollow inside. The walls of the cavity are covered with glandular hairs, similar to those of insectivorous plants. Thanks to these glands, for a long time it was believed that this plant is an insectivore. As an argument, it was often seen that dead insects were stuck in these cavities. Today, scientists have already explained that Toothwort plants are not carnivorous plants, these cavities are intended for evaporation of excess water. Also, the life of a carnivorous plant would be unsuitable for it, since the plant spends most of its life underground.

Toothwort forms above-ground shoots only when the plant has reached at least 10 years of age to reproduce and this above-ground part does not live longer than two months. During this time, Toothwort plants have time to flower, pollinate and ripen seeds. As hundreds of seeds spill from the plant, the shoots shrivel and die. The next time this plant will appear above ground no sooner than after 10 months, sometimes even after many years.

Toothwort feeds on its "host" plant. Toothwort thick rhizome (<1cm dia.), parasitises the roots of bushes and trees with suckers, absorbing valuable substances through them. In this way, the bezlape provides itself with a "complex lunch" in a ready-made form, it does not have to synthesize it itself. Therefore, sunlight is not important for Toothwort plants and they can live underground for years.

Toothwort flowers are characterized by protogyny, but cleistogamous, unopened and self-pollinated flowers also occur. Depending on the Toothwort species, its leaves can be pink, crimson, purple and violet. The flowers are located in an inflorescence, forming a dense, one-sided bunch.

The pink Toothwort (the only species found in Latvia, Lathraea squamaria L.) parasitizes beech, ash, alder, yew, linden, elm and hazel. Its flowers are crimson, pink to purple. The pink Toothwort also spends the first 10 years of its life underground, developing only the root system. Its inflorescences appear above the ground in spring, April-May, and together with the stem reach a height of 15-30 cm.

The root, which also has a separate name Radix Squamariae, and the surface part are harvested for medicinal purposes. Harvest in spring when the plant is in bloom. It is at this time that the trees on which the  Toothwort plant is parasitized begin the sap season. Shrink the root, clean it from the soil and dry it in a well-ventilated and shaded room.

The chemical composition of Toothwort has not been studied. It is believed that the root contains alkylating substances.

From a medicinal point of view, as well as from a chemical one, this plant has been studied practically not at all. Official science has also not conducted clinical studies, not even on animals, that would substantiate the medicinal properties of the plant. But assuming that the plant contains alkylating substances, then it could work as an antitumor agent and help a person cope with liver cancer, uterine and ovarian cancer. The ability of the plant to remove excess solution from the body makes it an excellent remedy for edema and ascites, the choleretic properties are useful for treating the bile ducts and gall bladder.

In folk medicine, Toothwort is used as a remedy for infertility, it stimulates ovulation, promotes high-quality egg fertilization, and increases the tone of the uterus. Healers believe that this plant is able to deal with prostate adenoma and prostatitis.

The plant is recommended for fibroids and uterine cysts. This plant is also used to cope with various liver diseases - cirrhosis, hepatitis, hepatosis, bone fluid deficiency and osteomyelitis. Toothwort is used as an anti-edema remedy to deal with ascites, to stimulate the heart, kidneys and liver.

Drink against obesity. Scientists are convinced that this plant, together with other natural remedies, can defeat oncology.

Toothwort plants are highly poisonous. This plant should not be used without specialist consultation, as severe poisoning and further consequences may occur as a result.