Bird in a bush
Corydalis 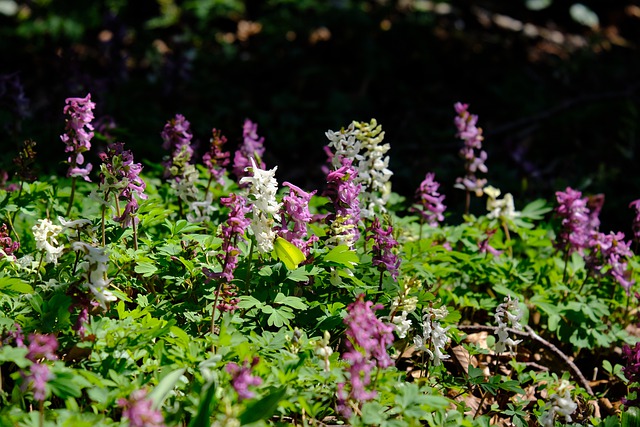 Most of Bird in a bush (Corydalis) are perennial, but annuals are also found. Plants have underground hollow gum-tuberous roots. Perennial gums not only grow large, but they also tend to develop cavities. Some fumewort also change their gums, making a new one in the old one every year and making the old one a shell.

Fumewort have upright stems, up to 40cm in height (most fumewort up to 20cm), which is unbranched with a clustered inflorescence at the top. The leaves of the stem are divided into two trilobes and fan-shaped. In inflorescences up to 20 flowers with bracts of various shapes. Inflorescences usually racemose or single-flowered at the end of a long peduncle. Flowers can be up to 30mm, more often violet or purple. The plant begins to bloom in spring and ends in June. Only insects with long snouts - male mosquitoes and flower flies - pollinate the plant.

When the plant blooms, elongated fruit boxes appear on the fumewort, which are often three times longer than the flower stalks. The boxes have thick walls and are pointed. Black shiny seeds inside. The seeds are spread by ants, who like to eat the white growths on them. The seeds themselves remain healthy and able to grow. However, new fruits grow from seeds only after 3-4 years.

After the seeds ripen, the flower stalks fall to the ground and die, and the lark "falls asleep" until the next spring. During this time, new flower stalks begin to form in the gum in autumn, which develop throughout the winter, form new flowers, which open already in early spring - April. Such an early vegetation of the plant is possible thanks to the fumewort gums, which have huge reserves of nutrients.

Hollowroot-birthwort (Corydalis cava) is a large plant up to 30 cm tall with one conical tuber, which eventually becomes hollow from the bottom. There are only two leaves on the plant, broad but tender, divided into elongated lobes. The peduncle raises a multi-flowered raceme with flowers <2.5cm high. The flowers are violet-pink in color, in rare cases there are specimens with white flowers. The plant is found in light deciduous forests. In Latvia, this plant is protected and included in the Latvian Red Book in category 1.

Bird-in-a-bush is the most common fumewort. The plant has a single scaly leaf at the base of the stem, which is bent to the side. And two pages above. It has beautiful pink-purple flowers arranged in a dense multi-flowered raceme.

Fumitory (Corydalis intermedia) is a similar plant to the dense fumewort. It differs with a branched stem, with whole bracts and small light flowers. The plant is included in the 2nd category of the Latvian Red Book.

The gums, roots and leaves of the plant are used for medicinal purposes. Lettuce is collected in the summer months, dried in the shade, in well-ventilated areas. Roots and gums are collected in autumn, September-October. They are cut into small slices and dried in dry rooms. Next, they are packaged in bags or plastic containers. Fumewort drug storage for up to 1 year.

The medicinal properties of fumewort are based on the presence of alkaloids. The alkaloid bulbocapnine is of particular interest to medicine. It is used to treat tremors (Parkinson's) and other diseases associated with increased muscle tone and hyperkinesis. It has been experimentally determined that it causes catalepsy and inhibition of other forms of movement, reduces conditionally reflex activity, increases the secretion of tears and saliva, as well as reduces peristalsis of the intestinal tract. Another alkaloid present in cypress is isocoridine, which is close to bulbocapine in physiological action. Coridine has a sedative effect on the CNS. Corytuberin, corikavin and coritvamine have an excitatory effect, enhance reflex excitability; coribulbin and isocoribulbin reduce blood pressure, suppress cardiac activity and dilate peripheral blood vessels.

The alkaloid sanguinarine has a weak psychotropic activity, similar to strychnine, by its pharmacological properties, causing excitement in the nervous system. In large doses, it causes paralysis of the nervous system, increases intestinal peristalsis and salivation, has antimicrobial and fungicidal effects.

The medicinal properties of fumewort have long been known in folk medicine. They have an analgesic and anesthetic effect. Fumewort also have antitumor activity, are astringent, hemostatic, antioxidant, anti-inflammatory and sleep-inducing. Fumewort normalizes the hormonal balance of women.

The alkaloids contained in fumewort have a strong effect on the human body. They should be used in small doses because they are highly poisonous and have a narcotic effect that can be compared to morphine. In case of overdose with this plant, body movements and reflex activity are suppressed, catalepsy may occur. Everyone whose eyes lit up when they heard the word morphine - will have to be upset, the effect is similar, but it is not morphine and the effect of this plant will also be followed by other side effects, which medical morphine does not have.

It is strictly forbidden to use this plant during pregnancy and lactation, as well as to treat children with its means. Since this plant has a strong effect on the human body, its use must be justified and prescribed by a specialist.

The leaves and stems of the fumewort are toxic, so they can cause poisoning.

If you are poisoned by a lark, you may not recover without medical help!