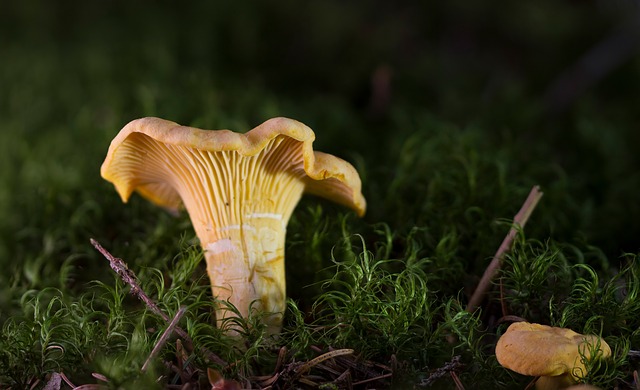 Of the chanterelles, the golden chanterelle is the most common and the most popular. Its pulp is dense, white, the outer part of the fruit turns yellow at the point of breakage. It has a pleasant aroma. These mushrooms are practically never wormy. It is found in mixed and deciduous forests, usually in large families (fungal "families" found together). They can be harvested from June to October.

This mushroom is one of the good, edible mushrooms, but it is quite difficult for the human stomach to digest it, so it would be advisable to be careful about using this mushroom in the diet before going to bed!

Dandelions contain a substance such as D-mannose (chitinamannose), which is basically intolerant of various insects and larvae, as well as all kinds of lower parasitic worms that can also live in the human body. The mushroom also contains beta glucans, which have an antiparasitic effect - activating natural processes in the body.

This mushroom is the first aid for ridding the body of worms and their larvae - they will die simply by receiving the active substance contained in the stems.

However, it should be noted that this substance decomposes and loses its properties at a temperature of 60C, as well as in the case of freezing and under the influence of salt. Therefore, if this mushroom is used as a natural healing agent, it would not be desirable to salt, freeze or heat treat it above 60C.

This mushroom can be used fresh, dried or in the form of infusions. Infusions are also used in the treatment of angina, boils and furunculosis. These mushrooms will also delay the growth of the tubercle bacillus due to their antibiotic properties.

There is also the characteristic of marigolds that they do not accumulate radioactive substances in themselves, but on the contrary - promote the release of radionuclides from the body. Of course, this would not be a reason to collect these mushrooms in a contaminated area.

Mushrooms contain vitamins A, B1, B2, B3, C, D, D2 PP, zinc and copper. Zinc and copper are important trace elements in ensuring hematopoiesis in any body. Also, due to the microelements present in the mushroom, they are recommended to be consumed in the diet, as they have a beneficial effect on the functioning of the heart, brain, lungs, and organs of vision, and it has long been used as an ingredient in the creation of skin care products.

It is not recommended to freeze cockles, as they become bitter during the freezing process, so drying to store them would be a better choice. It is possible to freeze them by first boiling them in milk or frying them in butter, but this method will not be a definite guarantee that they will not remain bitter.

Preparation of the infusion of marigolds:

For 100ml of vodka, half a tablespoon of ground chanterelles powder should be calculated, which is left for an average of 10 days in a dark place where there are no rapid temperature changes. The infusion is stirred/shaken during settling - I usually choose to make the infusion, in a larger container, as the volume of the infusion (400ml infusion, 500ml bottle), which I can shake well as soon as I remember about it! This infusion does not need to be filtered and is used by leaving the mushroom powder in it, I would even recommend shaking it before use and using it cloudy!

In case of parasites, the recommended dose is one tablespoon, on average for 20 days. Recommended for overnight.

In case of liver diseases (obesity, hemangioma, cirrhosis) - 1 teaspoon on average for 3-4 months.

In case of hepatitis - one teaspoon in the morning, one in the evening for an average of 4 months.

In the case of liver cleansing, one tablespoon on average for 14 days before sleep.