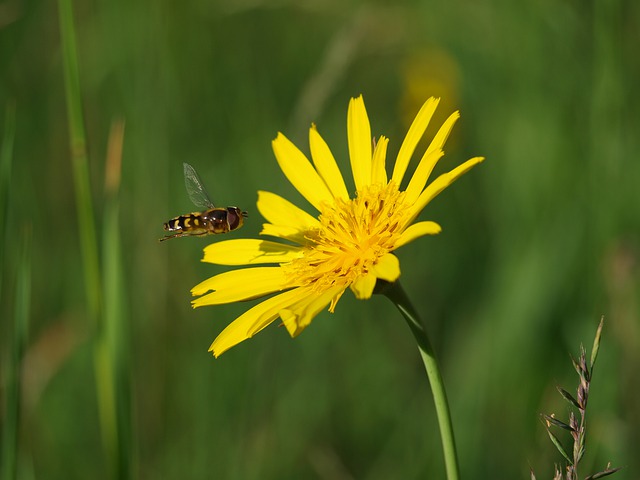 Goat’s-beard are usually biennial or perennial plants, 50-120 cm in height. The stems are branched, pinkish-purple in meadow sedge (Tragopogon pratensis L.). The root of the plant is straight, conical in shape, which extends into the soil up to 30 cm deep, its diameter is up to 4 cm. The rhizomes are fleshy and edible. Leaves elongated lanceolate, sessile. In the first year, the plant develops a root rosette with gray-green leaves, which are up to 30 cm long. In the second year of life, the Goat’s-beard forms a flower stem (up to 120 cm long) on which an inflorescence is formed. The plant begins to bloom in June and blooms for about a month. The species living in Latvia have yellow flowers, but they are also found in the world with pinkish flowers. In Latvia, there are three species of Goat’s-beard (Tragopogon pratensis L.), which is usually collected, the large sedge (Tragopogon major Jacq.)

The perennial rafters have an interesting feature, they can bloom for the first time only at the age of 3-5 years. The fruit is a large seed that has its own fluff (similar to a dandelion seed) that is blown away by the wind. The ability of seeds to germinate remains up to 3 years.

Many species of Goat’s-beard are already cultivated for medicinal and culinary purposes.

All parts of the plant are used for medicinal purposes: roots, young leaves and stems. Roots are collected for annual plants, dug in autumn, cleaned from the soil and dried. To get rid of the bitter taste of the roots, they need to be boiled in lightly salted water.

This plant is harvested in October-November. The first frosts are not dangerous for the roots of this plant - the roots only become sweeter. The roots of the Goat’s-beard are very fragile, so they must be dug carefully. Damaged roots are thrown away immediately, without waiting until they start to deteriorate.

The above-ground part is collected using secateurs, as the plant is relatively hard. Inflorescences are plucked by hand during their flowering. Do not be afraid if you find that the plant has closed - it has opened in the first half of the day, it has already closed in the second half of the day.

It is good to know that, when collecting the white beard, you should be careful not to touch mucous membranes and eyes with your hands. The plant is strongly bitter and can also irritate. After collecting, it is advisable to wash your hands thoroughly.

All parts of the plant are dried in well-shaded and ventilated places, then they are chopped and placed in a closed container. In this way, the wheel is stored for no longer than two years.

Goat’s-beard are still being researched and currently available information is not complete. However, it is known that the plant contains a large amount of PP and group B vitamins, as well as vitamin C. It contains potassium, phosphorus, magnesium, iron, selenium, sodium, calcium, zinc and other minerals. Starch, proteins and inulin are found in rhizomes. In the above-ground part of the plant, during flowering: protein around 20%, fiber around 25%, fat up to 10%, nitrogen-free extractives, easily digestible carbohydrates, bitter milk.

100 g of Goat’s-beard contains about 15% of the required daily dose of potassium. Therefore, this plant can be recommended for the treatment and prevention of cardiovascular diseases.

Studies have also shown that this plant helps to remove radioactive substances from the body. In addition, it has a beneficial effect on the functioning of the liver, gall bladder, pancreas, kidneys and bladder.

It is interesting that preparations based on this plant can increase a woman's sexual activity, and what is even more interesting is that they also have a positive effect on male potency, and this plant can be classified as an aphrodisiac.

The active substance in dried Goat’s-beard is more than 50%. According to research, this plant is recommended for people with diabetes. Inulin has a low carbohydrate content, therefore it does not affect the blood sugar and insulin content in diabetics.

In folk medicine, the plant has been known since ancient times. A root decoction is used as an expectorant for bronchitis and upper respiratory tract catarrh, as well as a diuretic and choleretic to treat kidney, ureter and liver diseases. The aerial part of the plant is also used in compresses to heal non-healing and festering wounds. The leaves of the plant are used as a "pulling" agent in case of pimples, hernias and other skin problems. Goat’s-beard milk is used to heal wounds, bedsores and skin inflammations.

Goat’s-beard is a particularly valuable plant that should be included in the diet of diabetics, as the plant contains a large proportion of inulin. This plant is included in many mixtures that are intended to fight against malignant tumors.

Due to the fact that this plant contains vitamin C and other valuable substances, it is recommended to use it for the treatment of avitaminosis, colds and scurvy, as well as to use it as a stimulant of the immune system.

Decoctions of the plant are used to get rid of dandruff and strengthen hair, as well as making nourishing face masks for all skin types.

This plant has no pronounced side effects, but it should be used with caution during pregnancy and lactation, as well as in small children. Rarely, but there are allergic reactions to this plant, so it is also advisable to refrain from using this plant.

Both young leaves and roots are used in food. The plant has a lot of nectar, but it is sweet, unlike dandelions. The unopened buds can also be eaten by boiling them a little, adding vinegar and oil.

Raftbeard is a great herb for salads and soups, and it can also serve as an additive/spice for other dishes.

200 gr. fresh stems and leaves, 50 gr. onion, 40 gr. cream, salt. The stems and leaves are flattened with a wooden mallet and held for 1-2 minutes in boiling water. Remove the skin from the stems. Cut all the greens, freeze and add cream.

Cut the potatoes into pieces, boil them until they are half cooked in salted water, add the mincemeat minced in a meat grinder, as well as the onion stewed in a pan until the soup is ready. Add cream and egg.

Potatoes and prepared roots are cooked until partially cooked in salt water. 5-10 minutes before the end of cooking, add carrots, onion, salt and spices stewed in a pan. Add cream.

The leaves and stems are flattened with a wooden mallet and kept in boiling water for 1-2 minutes. Grind Goat’s-beard and sorrel leaves in a meat grinder, add salt and pepper. The existing paste is used as an additive to soups, as well as a side dish to second meat dishes.

Dried leaves are crushed into powder, sifted through a sieve. Add to soups. Add 1 teaspoon per bowl of soup.