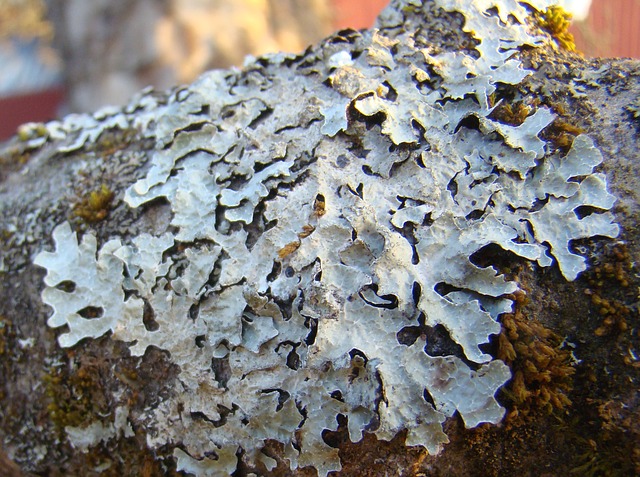 Shield Lichen is a perennial species of lichen from the Parmeliaceae family, its height is on average 4-6 cm, covered with leaves, gray-green in color, scaly and scurvy. This lichen is an interesting and complex organism that includes low-order fungi and algae.

This lichen grows both on conifers and deciduous trees, less often on some slopes or rocks, but as a rule, in well-lit places. This plant is not particularly demanding about the base on which to grow, but it is demanding about environmental pollution.

Lichen is harvested for medicinal purposes in late April and early May. Dried lichen does not have a characteristic smell, but already in tea it will give a bitter-burning taste and a slightly slimy feeling. Dried parmelia can be stored for 3-4 years without losing its biological properties.

Shield Lichen (Parmelia sulcata), similar to the blue-green platysmatia Platismatia glauca, resembles a gray round wrinkled leaf or rag. A closer look shows that the gray lobes have a strange surface. The entire surface is covered with irregular reticulation. The leaf seems to have easily broken through the Shield Lichen , forming a waffle-like structure. These are Shield Lichen - places where soredia develop. This 'waffle' is then a sure sign to distinguish the Shield Lichen from platysmatia and hypogymnia.

The chemical composition of Parmelia is unique. This lichen contains a lot of usnic acid and a lot of vitamin C. The composition also contains a lot of tannins, carbohydrates. Shield Lichen - lichenin, evenin and isolichenin - has been found in Parmelia polysaccharides. Proteins, fats and resins are also found in small amounts, as are calcium, potassium, phosphorus and pigments.

Thanks to usnic acid, vitamin C and tannin compounds, the plant has strong bactericidal, softening, antiseptic, blood-restoring and wound-healing properties. One of the strongest antibiotics (one of the first in the Soviet Union) is obtained from this plant - the preparation "Binans" (sodium salt of usnic acid), even at a concentration of 1:2,000,000 it has excellent bactericidal properties, but in higher concentrations it perfectly copes with tuberculosis agents. Parmelia has a much higher concentration of usnic acid than Icelandic cetaria. Parmelia does not lose its properties for many years and is resistant to temperature effects - it is not harmed by high temperatures.

The substances contained in parmelia have a destructive effect on gram-positive and gram-negative, as well as acid-resistant bacteria and some types of fungi.

Due to its high vitamin C content, it is often used as an immunity booster. Parmelia has a calming effect on both the gastrointestinal tract and the respiratory tract. Externally, it is used to treat non-healing and suppurating wounds and ulcers. Stops bleeding. In cases of injury and cut, a highly concentrated decoction is prepared from parmelia and applied as a compress directly on the wound. In the Second World War, the Shield Lichen was dried, ground into powder and mixed with vaseline - later such vaseline ointments reached the battlefield medics.

Today, in Germany, Japan and France, the ribbed parmelia is still used in powder form, mixing it into various flour-like products. They are then used to make medicinal gels, jellies and marmalades, as parmelia tends to swell in contact with hot water and form a thick mass.

Some recipes and explanations

A decoction of Shield Lichen on milk. For the treatment of tuberculosis and chronic cough.

One tablespoon with a pile of dried Shield Lichen , 0.5L of milk.

It is heated in a water bath (vessel within a vessel) for 1 hour, then it is left to stand for two hours. Next, it is necessary to filter the obtained mixture. Add 2 teaspoons of honey or propolis syrup. Use half a glass (100ml) 15-30 minutes before meals, 4-5 times a day. The last dose is taken before bedtime.

The literature also describes cases where, with the help of this drink, in large doses (3x the above mentioned), it was possible to quickly get rid of acute colitis. It took 2 days to recover.

A decoction of Shield Lichen in water.

Similarly, boil on a water bath for about 1 hour, let it sit for 2 hours and filter (separate the thickets). Use 2 tablespoons before meals 3-4 times a day. The course of use is exactly 30 days, even if it becomes easier faster. It is recommended to keep such a decoction in the refrigerator for no longer than two days.

It is recommended to use the following decoctions:

Boil on low heat for 10 minutes, let it sit for 30 minutes and use it as a compress on non-healing wounds or ulcers. Such a decoction will also effectively clean wounds from pus.

Vaseline ointment for the treatment of non-healing wounds, ulcers and bedsores. Purified vaseline ointment is usually used, which is mixed with parmelia powder until a buttery mass is obtained. Apply a thick layer on the required area and cover it with gauze.

When should Parmelia not be used?

Rarely, Shield Lichen can cause an allergic reaction - itching or hives. One of the factors could be the uric acid in its composition, to which someone may have an individual intolerance.

It is recommended to avoid Shield Lichen during pregnancy and breastfeeding (oral use) due to unknown effects. It is also not recommended for hypertensive patients, or use with extreme caution.

For children up to the age of 6, it is recommended to use decoctions of the grooved parmelia only in case of serious sores, when it is really necessary - but the dose should be determined by a phytotherapist.

The use of Parmelia will in no way affect the ability to drive or operate equipment. Even small overdoses will not cause side effects.