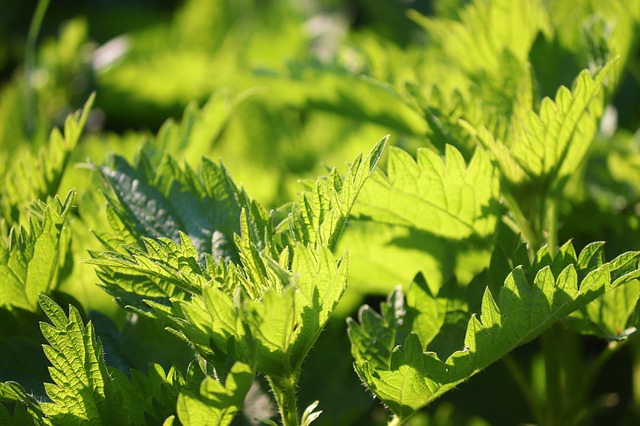 Common Nettle is a perennial plant, up to 170 cm tall, with a long creeping, branched root and many small roots. Stems erect, four-sided, grooved. Leaves on petioles, ovate with a pointed tip, with a toothed margin.

Stems and leaves covered with stinging and burning hairs. The hairs are hard and fragile, so when they are pricked, they break off and release formic acid and histamine. Flowers small, unisex, green. Inflorescences placed in leaf axils, long, cob-like, bent. The fruit is an oval nut, yellow-gray in color, 1.2-1.5 cm long. The large nettle blooms from June to September.

Common Nettle leaves, which are collected during flowering, are used for medicinal purposes. The leaves are cut along with the stems, allowed to twist and when the stinging disappears, the leaves are plucked. Dry in well-ventilated rooms or in dryers not exceeding 40-50C.

Common Nettle preparations are used in the case of increased menstrual bleeding, during the treatment and recovery of uterine erosion, in the case of climacteric bleeding, fibromyoma, as well as in postpartum and post-abortion cases to straighten the uterus.

In pharmacology, nettle is used as a vasoconstrictor, bile expeller, vitaminizing, urine expeller. Nettle also has properties that promote the regenerating processes of the mucous membranes of the stomach and intestines.

The hemostatic properties of this plant are provided by the vitamin K contained in it, which stimulates the production of prothrombin in the liver - it is the most important factor promoting blood clotting.

The sum of the active substances, mainly vitamins and iron salts, which are present in the nettle, normalizes the lipid exchange in the body and has a stimulating effect on the regeneration of erythrocytes.

Nettle leaves increase the activity of the digestive glands and the amount of milk (in nursing mothers), reduce the level of sugar in the blood and urine.

The chlorophyll in nettle leaves has a stimulating and tonic effect, increases the basic metabolism, also promotes the tone of the muscles of the uterus and intestines, strengthens the work of the cardiovascular system and the respiratory system. Stimulates granulation and epithelization of damaged tissues.

Nettle-based ointments have a phytoncide effect on staphylococcus aureus and hemolytic streptococcus, and also treat skin problems that are resistant to antibiotics.

The use of nettle in folk medicine has been known for a long time. Even in the Middle Ages, it was widely used in case of lead poisoning, as well as in case of kidney stones.

It is not recommended to use nettle preparations for people with increased blood clotting, hypertension and atherosclerosis, and it is also undesirable to use it for people with bleeding caused by cysts, polyps and various forms of uterine tumors. The big nettle should be used especially carefully by kidney patients.

Nettle leaves: pour 10g (2 tablespoons) of the drug into an enameled container, pour 200ml of boiling water over it, heat it in a water bath for 15 minutes, cool it at room temperature for 45 minutes, separate the thicknesses and squeeze them, add the resulting setting to the original volume. The resulting solution is stored in a cool place for no longer than 2 days. Use ¼-1/2 cup 3-5 times a day as a means to stop bleeding.

Decoction of nettle roots: boil 20 grams of the drug in 200 grams of sugar syrup for 15 minutes - there are recipes where it is recommended to add honey, but it is better not to boil the honey - serve it as is. Use one tablespoon 5-6 times a day.

Nettle leaf juice: take 1 tablespoon 3-4 times a day before meals, in case of gallstones and kidney stones; 1 teaspoon 4-5 times a day in case of internal bleeding. The juice is pressed from April to September. The standard dose is 1 teaspoon 3 times a day.

Decoction of nettle seeds: pour 25 g of drug with 200 ml of water, boil for 10 minutes, let it rest for 1 hour, separate the thickets and add honey to taste. Used at night.

The roots of the large nettle are stronger than the surface part. In the case of diseases such as anemia, liver disease, rheumatism, reduced blood clotting, diabetes, acute gastritis, enterocolitis, internal bleeding, various ureteral diseases, kidney stone disease, 1st and 2nd stage prostate adenoma, nettle roots and leaves are used - 1 tablespoon of the drug is sprinkled with boiling water and boil for 5 minutes, separating the thickets. Drink one glass in the morning and in the evening, for 1-1.5 months.

Decoction of nettle: take 5 tablespoons of chopped nettle (leaves and stems), pour 0.5L of boiling water over it, keep it on low heat for 5 minutes. Leave for 30 minutes and separate the layers. It is used to improve heart function by ½ cup 4 times a day, you can add honey and sugar.

The leaves are used to lower blood sugar. In dried form, they are mixed into sour milk or yogurt, at the rate of 2 tablespoons of dry leaves per 1 glass.

Nettle is effective in acute and chronic inflammation of the small intestine. Externally, nettle is used for skin itching, thrush, joint pain, dandruff and hair loss. Mixing nettle root with garlic root and a decoction of burdock root makes an excellent hair care product. Rub the scalp with this product after washing your hair. Treated for 2 weeks. The course can be repeated for 1-2 weeks, 4-6 months.

Nettle seeds are highly rated for treating male line problems! To strengthen men's strength: 1. Boil nettle seeds as a tea and drink 30 minutes before meals and 1 hour after meals. 2. Pour 0.5L of good grape red wine over 20 grams of nettle seeds, leave for one week and separate the pulp. Use one tablespoon three times a day. 3. Mix crushed seeds with honey and red wine, use 1 tablespoon, 3 times a day to increase sexual interest and increase potency.

Stinging nettle can also be used to get rid of unwanted hair by making an oil extract. Nettle oil (from the seed to get rid of hairs): pour 40 grams of crushed nettle seeds with 100 grams of vegetable oil. We keep this mixture for two weeks. Then we separate the layers and pour the extract into a dark glass container. This oil is applied to the skin no more than twice a day, in the necessary place. It is best to store it in the refrigerator, in a sealed container.

The young leaves and seeds of nettle are used in food. Wash the new leaves before use to lose their "sting". Nettle leaves are used in salads, soups, stews and as an addition to various meat dishes. The plant does not have a specific taste and together with other plants, it can also be considered relatively neutral. In the diet, nettle (Utrica urens) can also be used equally, especially people who have a negative reaction to vitamin K, because nettle does not contain this vitamin.

200 gr. young nettles, 30 gr. onion, 20 gr. parsley, 25 gr. walnut. Rinse the washed nettle leaves for 5 minutes, place on a sieve to drain and add to the salad. Chop. Chopped walnuts are added to ¼ cup nettle decoction, vinegar is added, mixed and used for salad. Add the rest of the greens to the salad.

Young nettles are boiled in water for 3 minutes, dried, ground in a meat grinder and stewed with fat for 10-15 minutes. Finely cut carrots, parsley, onions are stewed in a pan in fat. Put nettle, stewed vegetables, onion in boiling broth (water) and cook for 20-25 minutes. 10 minutes until the soup is ready, add the white sauce, bay leaf, pepper, cloves and sorrel.

Rinse the nettle in boiling water for 2 minutes, drain on a sieve and finely chop, stew in fat for 10 minutes. Carrots and onion are chopped and stewed in a pan. Put potatoes in a boiling pot, let it boil, add nettle, carrot, onion and cook until ready. Acid and white sauce are added 5-10 minutes before the soup is ready. Before serving, cut an egg and add cream.

The big nettle in Georgian taste

Boil nettles in salted water for 5 minutes, drain on a sieve. Sauté onion in hot oil on a pan, add boiled nettle and cilantro, salt and melted butter, mix well and stew for 10 minutes.

Then add fresh eggs, salt and fry on the stove. Then put it in the oven and finish cooking.

The dough is made from wheat flour, eggs, salt and warm water (35C). Let the dough rest for 30 minutes, roll out to a thickness of 2 mm.

For the filling, chop nettle, fry onions in oil in a pan and mix with nettle. Prepare the dumplings and cook them in salted water as usual. Serve with cream or butter.

Boil nettle leaves in lightly salted water, drain on a sieve, chop, cover with flour, add 2-3 tablespoons of nettle decoction, mix and stew. Stir continuously until it increases in volume.

Add ground horseradish, onion fried in vegetable oil. Serve as a side dish to other dishes.

Sort and boil the nettle, fry the onion, add the rice and fry again. Separate the nettle from the water, cut it, put it in a pot and add the fried rice with onions. Add 2 cups of nettle decoction, add salt and put in the oven for 20 minutes (until the rice is ready). Plovu is served chilled.

Boil nettle in salted water. Dill and parsley are added to the fried onion, mixed with boiled nettle and stewed until done. Then sprinkle with beaten eggs and bake until done.

Young nettle shoots and leaves are rinsed, chopped and put in glass jars and salted with an estimate of 50 gr. per 1 kg of nettle.

Dried nettle leaves are crushed into powder. The powder is used in soups, sauces, omelets, porridges.

The resulting juice can be used for various drinks and supplements. For longer storage, the juice is filled in jars, pasteurized at 65-70C for 15 minutes, tightly sealed and stored in a cool place.

1 kg of nettle, 0.5 kg of honey, 1 L of water. Pass the leaves through a meat grinder, add 3 glasses of water, boil, separate the pulp through cheesecloth. The resulting juice is mixed with honey, the remaining water is added, boiled, cooled and bottled. Store in a cool place.

Mix ground nettles and clover with horseradish and butter. Used in sandwiches and as an additive to ready-made cereal dishes.

Filling for pies from nettle

1 kg of young nettles, 5 eggs, 100 gr. rice. The nettles are poured with boiling water and kept for 5 minutes, drained on a sieve, chopped, mixed with boiled rice and a boiled egg. Salt as desired.

Nettle extracts are present in cosmetics at 1-2% of the total mass, in hair care products up to 10%. Stinging nettle extract is used as:

It is not recommended to use nettle extract in medicated cosmetics: