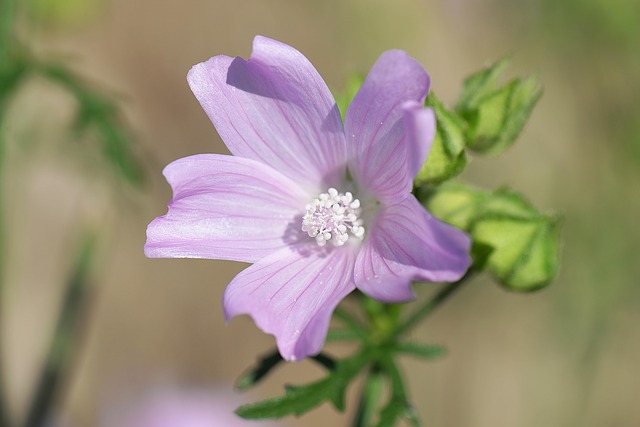 The fruit is dry, which splits into several lobes when ripe. The plant blooms from June to September.

The plant is widespread - found on rocky soil, roadsides, fields and often in gardens as a weed.

The leaves of the plant can be used equally with spinach and lettuce. The plant is an insecticide. Can be used as an alternative to altea.

The whole plant - leaves, roots and flowers - can be used for medicinal purposes. The leaves are harvested before the plant has started to flower. The plant is dried in warm and well-ventilated rooms, hidden from direct sunlight.

Roots are dug in autumn, when the plant has finished ripening its seeds. Dry in ovens or forced dryers not exceeding 50-60C. Leaves and flowers are stored in a closed glass container, root boxes or bags. The drug is stored for up to 2 years.

All parts of the plant contain mucilage. Vitamin C, carotene, tannins, nitrogen-containing compounds, sugars are found in the leaves. The fruit contains a lot of ascorbic acid and anthocyanin compounds, including malvinic chloride, which breaks down into glucose and malvidin. Carbohydrates, steroids, vitamin C and vegetable fats, which include palmitic acid, stearic acid and oleic acid, as well as waxes and dyes, are found in the surface part of the plant.

It is worth knowing that the anthocyanin glycoside malvina is nowadays used to make high-quality cough syrups.

Small Mallow has anti-inflammatory, enveloping, expectorant and anti-diabetic effects. Preparations of this plant regulate the function of the digestive tract, are useful in cases of pulmonary tuberculosis and severe cough, when sputum is poorly released. In the latter situation, it is preferable to also rinse the throat 5-8 times a day.

Small Mallow is effective in the treatment of renal colic, inflammation of the pancreas, dyspepsia, skin tuberculous lesions, early stages of diabetes and skin ulcers. The infusion on milk is used as a powerful diuretic and heart attack reliever, as well as a remedy for gonorrhea, diarrhea and menstrual disorders.

Externally, Small Mallow is used in the form of applications, using all parts of the plant. The plant is also used in ointments, to treat inflamed skin, burns, eczema and hemorrhoids. In case of diseases of the spleen, decoctions for the bath are prepared from the Small Mallow, medicinal chamomile and common wort.

In folk medicine, parts of the whole plant are used - leaves, flowers, fruits and roots. Small mallow is used for the treatment of respiratory diseases - lung inflammation, angina, tracheitis. The setting of the small mallow will help to recover the voice, reduce hoarseness, get rid of inflammation of the tonsils.

Thanks to the mucilage contained in the plant, it is useful for constipation and intestinal atony.

Flatulence, colitis, gastritis, enterocolitis, inflammation of the digestive tract. In Central Asia, the seeds of the plant are used as one of the mildest laxatives.

Cystitis and other diseases of the excretory system.

Avitaminosis, general weakness after serious illnesses or surgical intervention and in case of low immunity.

The plant is useful for rinsing - in case of periodontosis, stomatitis and other diseases of the oral cavity.

Its setting can be used to rinse the eyes in case of blepharitis, conjunctivitis and other eye diseases.

Mucilage present in the plant has a large adsorption surface and has an antitoxic effect.

The most valuable feature of Small Mallow is their harmlessness. There are no poisonous compounds in the plant, but to reduce the risk of allergies, it is not recommended to give it to children and pregnant women.