honey fungus
Armillaria mellea, A. Cepistipes, A. Borealis, A. Lutea 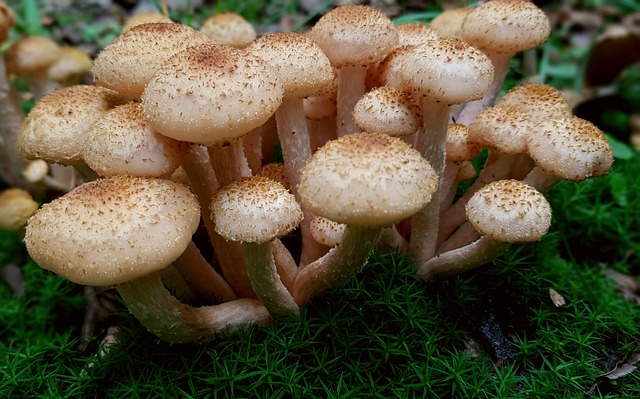 Autumn strains from the Armillaria family found in Latvia are a valuable source of vitamins. They contain vitamin A, B2, B3 and B6. They contain a large amount of polysaccharides, trace elements (iron, potassium, magnesium, copper, zinc and others). Thanks to the quantity and diversity of these valuable substances, honey fungus can serve as a universal body tonic and stabilizer.

Honey fungus have a beneficial effect on the body in case of high blood pressure, deterioration of vision, problems with the functioning of the digestive system and respiratory diseases. Honey fungus increase blood flow in the brain and heart, have a calming effect and protect cells from the ionizing effects of radiation.

Chinese biochemists have determined the inhibitory effect of strains on sarcoma-180 and Ehrlich carcinoma. European scientists determined the antibacterial and anti-inflammatory effects of strains. For one, the effectiveness of the strain extract against Staphylococcus aureus, hay fever and Bacillus cereus was also determined.

The alcohol extract has an anti-inflammatory effect due to the increase in the production of cytokinins and the inhibition of nitric oxide as well as cyclooxygenase enzyme (COX-2). The water extract, on the other hand, has immunomodulating properties, the ability to shift immune cells to inflammation.

Preparations have already been developed from strains that reduce cholesterol levels and normalize blood pressure. There are countries where stem preparations are used by official medicine to treat nervous and cardiovascular diseases. Currently, a preparation has been created based on the strain, which prevents the occurrence of eclampsia.

Experiments on mice have determined the anti-anoxic properties of an aqueous extract of the strain, giving this fungus the potential to create drugs designed to treat tissue oxygen deficiency.

In folk medicine, the mushroom extract is used as a pain reliever (for heart and headache relief), in Austria, the stem is used as a laxative and in ointments to treat leg and joint diseases.

In Chinese folk medicine, the stem is used as a tonic. Tablets are made from dry fruiting bodies, which are used to reduce light sensitivity in the eyes, headaches, neurasthenia, insomnia and convulsions. Other preparations of this mushroom are used to treat gastritis, poor eyesight, dry skin, respiratory diseases, high blood pressure, spasms, as well as for relaxation of the nervous system.

Fermented stem juice is used to treat the liver, tinnitus (a manifestation of blood pressure), Ménière's syndrome (a disease of the middle ear) and rehabilitation after a stroke.

Chinese and Japanese scientists have also observed an interesting phenomenon that mushroom extract has the ability to prolong sleep and enhance the effects of hypnosis.

Fruiting bodies of mushrooms are collected only when they are young, but with the cap already open. Rhizomorphs can be harvested all year round! It is most effective to dry the mushroom or use it for extracts!