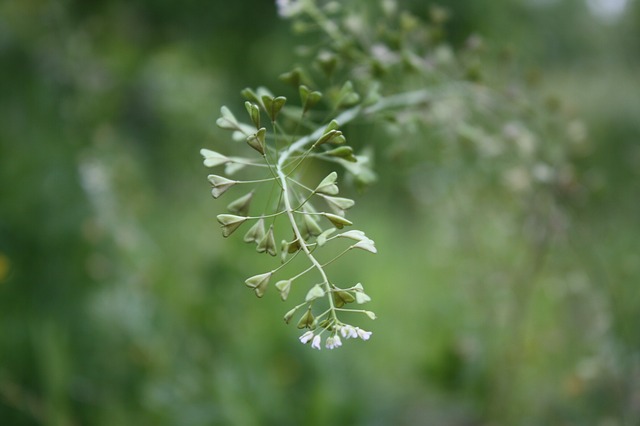 Shepherd’s-purse - an annual plant, 20-30 cm tall (in rare cases up to 60 cm) with a spindle-shaped root. Stem branched, erect. Root leaves collected in a rosette. The flowers are small, 2-4mm. The flower consists of 4 white petals. Small seeds 0.8-1mm, no more than 8 in each seed box. It begins to bloom from April to autumn, the seeds ripen throughout the growing season, starting from May. Can produce several generations during the growing season.

The plant begins to be harvested during flowering, until the seed pods begin to brown. The entire surface part of the plant is usable. Plants with ripe seeds or diseased with fungus cannot be harvested. Dry in shaded, well-ventilated areas or in dryers at a temperature not exceeding 45C.

The seeds contain up to 28% vegetable fat and a small amount of allium mustard oil.

Preparations of the shepherd's eye have many medicinal properties, it has pronounced hemostatic properties, especially hemorrhages with insufficient fibrin formation. Shepherd’s-purse increases the function of uterine smooth muscle contraction, this is facilitated by the essential oils and acetylcholine present in the plant.

The leaves of the plant have high phytoncide activity. Water and alcohol solutions have hypotensive, choleretic and diuretic properties. The plant is effective in kidney bleeding when other blood-stopping preparations do not work.

When treating patients with pulmonary tuberculosis, with the aim of stopping pulmonary bleeding, the manifestations of the hemorrhagic syndrome and hemocoagulogram indicators improve significantly.

Shepherd’s-purse also affects the cardiovascular system. It produces a normalizing and regulating effect on an exhausted heart, especially in the elderly, and is equivalent in effect to white mistletoe, whether the blood pressure is elevated or lowered.

This plant is also no stranger to folk medicine, it is used to reduce arterial blood pressure, as a means to stop bleeding, after childbirth or in cases of internal bleeding (lungs, kidneys, gastrointestinal tract).

Shepherd’s-purse leaves are used to treat poisoning or the effects of poisonous insect bites. The preparations are used as a means to stop bleeding after childbirth, meno- and metrorrhagia, cancer and uterine fibroids, uterine atony, also used during the climactic period of vomiting and uterine bleeding in pregnant women. As a simple tea, it is used for menstrual disorders.

In folk medicine, this plant is also popular as a blood purifier, in case of liver and bile secretion problems, for the treatment of kidney and bladder diseases, for the prevention of kidney stones, diarrhea, fever and high arterial blood pressure. The plant is also used externally - rinsing the oral cavity in case of various infections, rinsing non-healing wounds and abscesses, as well as in case of vasculitis and eczema.

This herb can be applied topically for nosebleeds, as well as taken orally to relieve heavy menstruation. The plant is held in special respect in Tibetan and Chinese medicine.

Despite the many properties of the plant, the use of Shepherd’s-purse also has its limitations. Shepherd's eye can provoke premature birth and even abortion. It promotes blood clotting, so it should not be used by thrombophlebitis patients and people with increased blood clotting. Shepherd's lash should not be used by people who have problems with blood vessel blockages, who have suffered a stroke or heart attack.

Shepherd’s-purse is also an excellent food plant. It is harvested in early spring when it forms rosette leaves. In summer, it forms rosettes less frequently, as it gives all its strength to the stem to bloom and form seeds.

The young leaves of the Shepherd’s-purse are eaten fresh in salads or boiled as an addition to soups. There is information that the leaves tend to be salted and left for later. In Asian cuisine, the plant is used in food as an equivalent to spinach.

Salad from Shepherd’s-purse and tomatoes

Grind greens with a meat grinder, add mustard, salt, pepper and mix together with butter. Used for sandwiches.

Young leaves of ganache are dried and ground into powder. Add red hot pepper at the rate of 1 tsp. pepper on 2 cups of Shepherd’s-purse powder.