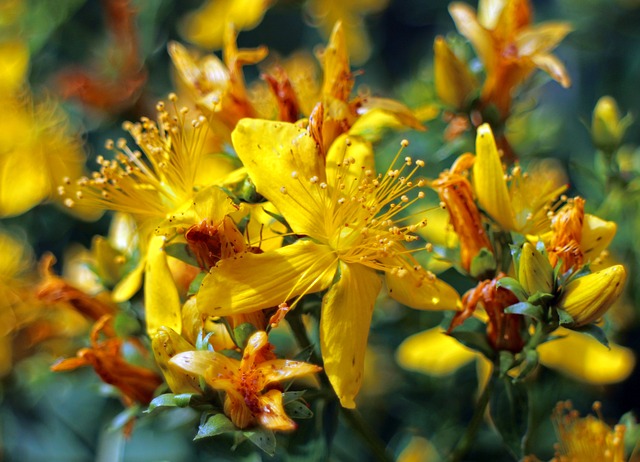 John's wort infusions are used in the treatment and prevention of gingivitis, stomatitis, to eliminate bad breath and strengthen the gums. St. John's wort preparations are used to treat dyskinesia of bile ducts, hepatitis, blockage of bile in the gallbladder, cholecystitis, chronic colitis, gallstones in the initial stage, gastritis with insufficiency of gastric juice, flatulence, as well as when kidney filtration function decreases. Also helps with kidney stone disease.

John's wort has long been one of the basic herbs used in many different herbal tea mixtures.

St. John's wort - is a perennial plant, 30-100 cm tall. Stem glabrous, bilobed, strongly branched at the top. The roots are poorly developed, little branched. The leaves are sessile, oval or egg-shaped, single-piece with visible veins - in the form of black dots. Flowers collected in one inflorescence. The flower consists of five lanceolate petals, with yellow-orange petals. The petals are sprinkled with black-brownish or purple dots.

The aerial part of St. John's wort (Hyperici herba) is used for medicinal purposes. The plant is harvested throughout the flowering period - until the first fruits appear. To prepare drugs, the above-ground part of the plant is cut to a length of 25-30 cm. The grass is dried in well-designed and shaded rooms or dryers at a temperature not exceeding 40C. It can also be tied in small bundles and hung in the shade. Hypericum maculatum Crantz is also used for medicinal purposes. Drugs can be stored for up to 3 years.

John's wort contains tannins up to 13%, flavonoids up to 8%, hyperoside (in the herb - 0.7%; in the flowers - 1.1%), rutin, quercetin, quercitrin and isoquercitrin; carotene, antibiotic hyperforin; leucoanthocyanides and anthocyanins (5-6%), essential oils (0.1-1.25%), in which cineole is found. Gums, nicotinic and ascorbic acids, vitamins P and PP, choline, anthocyanins, saponins, alcohols, traces of alkaloids and other compounds.

St. John's wort has been used in medicine for a very long time. The first, traceable records are found between 460-377 BP. In the Notes of Hippocrates. Dioscorides already in ancient times meant to take St. John's wort with honey. Pliny also wrote about this grass.

Both St. John's wort and St. John's wort are special in that scientists have already shown that it is a valuable alternative to mild antidepressants and does not leave effects on the liver.

The flavonoids present in the bilberry have an antispasmodic effect on the smooth muscles of the intestines, blood vessels, bile ducts and the bladder, preventing blockage of bile in the gallbladder, ensuring greater bile discharge, reducing the possibility of gallstones. Removes large and small intestinal spasms, restores normal peristalsis, significantly improves digestive processes.

St. John's wort removes spasms of blood vessels and produces a capillary strengthening effect, which is typical of all plants containing vitamin P.

Preparations containing St. John's wort improve venous circulation and blood supply to internal organs, as well as increase diuresis, as a result of which the pressure on the walls of the urinary bladder decreases, also promoting the kidney's filtration capabilities.

But let's not forget the women who are recommended to use this plant to reduce the symptoms caused by PMS and climax. St. John's wort alleviates the peculiar conditions before a woman reaches menopause. St. John's wort helps to normalize the nervous condition and reduces the frequency of hot flashes.

John's wort is able to normalize the hormonal background, it reduces the level of prolactin in the blood, while at the same time slightly increasing the level of androgen. These are male hormones, so in a woman's body they must be in limited quantities, which St. John's wort will also promote. With its help, the menstrual cycle can also be normalized.

The plant has photosensitizing properties, meaning it increases sensitivity to the sun, this is due to hypericin, a pigment found in St. John's wort.

Tanning substances produce mild astringent properties, have antimicrobial activity against many microorganisms that are often resistant to antibiotics.

Hyperforin suppresses the growth of Staphylococcus aureus, acts on gram-positive microflora in low concentrations, but practically does not act on gram-negative microorganisms, fungi and actinomycetes.

Bitter substances promote gastric secretion. Hypericin, which is contained in the plant, works as a catalyst for the development of various internal cellular processes, which are extremely important for the organism's ability to live.

The plant increases the ability of the skin to absorb ultraviolet rays, but unfortunately, these parts of the plant do not combine with water, but are found only in alcohol extracts and the juice of the plant.

In folk medicine, St. John's wort flowers are placed on oil, which is then used to treat bruises, wounds, ulcers, lacerations and burns. It is used to treat diseases of the lungs, stomach, intestines, gall bladder, as well as diarrhea and disorders of the nervous system.

After a little research, knowing the desired effect of St. John's wort, you can choose which one is more useful:

The preparations are non-toxic, but because St. John's wort contains bonds of various alkaloids, they can cause CNS excitability, insomnia, photosensitivity. This plant should not be used by pregnant women, lactating women and children under 12 years of age. Of course, if you are allergic to any of the substances that St. John's wort contains.

John's wort can also cause side effects - unpleasant sensations in the liver area, bitterness in the mouth, constipation, loss of appetite. It increases arterial blood pressure, so it is not recommended for hypertensive patients.

At present, the interaction of St. John's wort with medical preparations has already been investigated and it has been established that St. John's wort can reduce their effectiveness. Therefore, St. John's wort reduces the effectiveness of medicinal drugs and substances such as cyclosporine, warfarin, steroid preparations, antiviral agents - reverse transcriptase inhibitors (amprenavir, indinavir, ifavirecs, nevirapine, nelfinavir, ritonavir, saquinavir); for inhibitors of proteolytic enzyme activity.

Applies to both types of St. John's wort, both double-faced and four-faced.

John's wort decoction: pour 10g (1 tablespoon) into an enameled container and pour over 200ml of hot boiled water, close with a cap and bathe in warm water for 30 minutes, cool for 10 minutes at room temperature, separate the thickets, the thickets can also be pressed. The remaining decoction is supplemented with boiled water, up to the original amount. The resulting decoction is stored in a cool place for no longer than two days. Take 1/3 cup, 3 times a day, 30 minutes before meals.

St. John's wort extract is prepared in a ratio of 1:5 in 40% alcohol. It is used as an astringent and anti-inflammatory agent in stomatology. 40-50 drops are taken orally, 3-4 times a day. For rinsing, 30-40 drops per ½ glass of water. Validity period 4 years.

John's wort juice is made in June-July from a freshly blooming plant (stems are usually not used). Use one tablespoon of juice with honey, 3 times a day, 30 minutes before meals.

John's wort oil: 20g (~ 3 tablespoons) fresh leaves and flowers of the plant are sprinkled with 200g of vegetable oil. Set aside for 2 weeks in a dark place at room temperature, shaking occasionally, then separate the thickets and squeeze them out.

Steeping St. John's wort: 10g of the drug is steeped in 200ml of boiling water for 30 minutes, then it is removed from the thickets. Use 1 tablespoon 3-4 times a day.

Alcohol extract: pour 4 tablespoons of St. John's wort with 100 ml of 96% alcohol, leave for 10 days in the dark. The obtained mixture is separated from the thickets, the thickets are squeezed out. Use no more than 50 drops 3 times a day. If the extract is prepared on brandy, then the dose can be increased. For external use and rinsing, add 30-40 drops to ½ cup of water.

In case of bronchitis: pour boiling water over 10 grams of dry medicine and let it sit. Use 1 tablespoon, 3-4 times a day after meals.

In case of myocarditis: 15-20 grams of dry drug is sprinkled with 0.2 L of alcohol or vodka. Use 30 drops, together with water, 3 times a day after meals.

For wound healing: fresh St. John's wort leaves and sage leaves (1:1), mix well with pork fat, squeeze everything through cheesecloth. Store in a tightly sealed container. It is used as an ointment - locally.

In case of bad breath: add 20-30 drops of alcohol extract to ½ glass of water. It is used as a rinsing agent.

In case of enterocolitis: it is recommended to use 20% alcohol infusion, 1 teaspoon 3 times a day.

100 gr. dried St. John's wort, 100 gr. honey. Prepare the decoction according to the previous recipe. Honey is added to the cooled decoction.

St. John's wort extract is very ambiguous - it effectively heals, softens and tones the skin, while at the same time it contains elements that cause photosensitivity. Anyway, this plant is widely used and in demand in cosmetics, because its medicinal effect suppresses any side effects.

This is one of the rare plants that is used both in official and folk medicine. St. John's wort extract acts as an antioxidant on the skin due to the bioflavonoids it contains (eg hypercin). The advantages of such an ingredient are its anti-inflammatory, reparative, protective and tonic properties. St John's wort reduces the chance of scarring as it prevents the formation of scar tissue.

St. John's wort extract has the ability to soothe the skin. Its anti-inflammatory properties are based on phytocompounds that suppress the activity of inflammatory mediators - this gives the opportunity to use this plant for desensitization and protection of sensitive and inflamed skin, including after burns with UV radiation.

St. John's wort extract is also astringent and has antifungal and antibacterial properties. In addition to these, the antioxidant properties also make this plant extract useful against various skin diseases.

The extract perfectly tones and softens the skin, and protects it from aggressive environmental influences.

St. John's wort extract is effective for the treatment of acne and pimples - the antiseptic, astringent and reparative properties of St. John's wort work perfectly in moments of exacerbation, and also prevent the development of scar tissue after acne breakouts.

St. John's wort extract will also help with skin injuries, speeding up its healing and protecting against pathological scar tissue. Often, this remedy is also able to relieve pain. St. John's wort extract has also found its place in rehabilitation after surgery, as it is able to reduce scars, healing them and preventing them from becoming inflamed at the same time.

The plant is also used in case of serious dermatological problems - boils, tears, bacterial infections of the skin and non-healing wounds.

In general, St. John's wort extract is universal! Whatever the skin type, the extract will help kill bacteria, relieve inflammation, moisturize, restore its elasticity and reduce signs of aging.

St. John's wort should not be used cosmetically if there is an individual intolerance to it. It is also not desirable if antibiotics and oral contraceptives containing estrogen are used. In addition, when using St. John's wort even externally, it is preferable not to take medication at that time - it will be most effective to consult your doctor who has prescribed the medication.

It is also worth mentioning that St. John's wort increases photosensitivity. It contains ingredients that can cause skin irritation, aggravate burns or even cause contact dermatitis when exposed to the sun! This effect is often minimized by adding various solar filters to the product. But there is also one safer way - after using the extract, stay out of the sun for at least 2-3 hours!