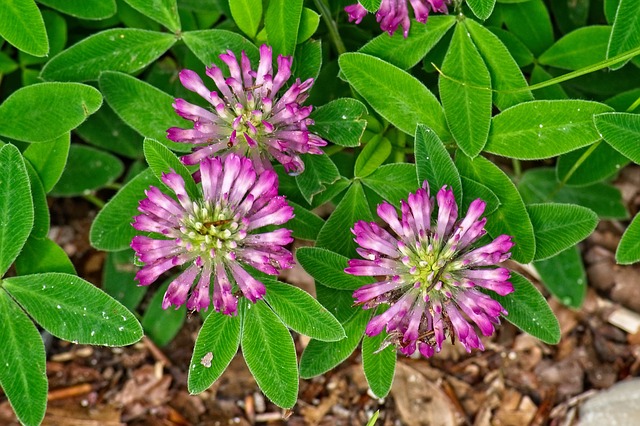 Perennial plant, with erect slightly bent stems with small white or violet-red flowers, which are collected in a bulbous inflorescence. The plant reaches a height of 20-60 cm. Blooms from May to mid-late September. A good honey and fodder plant. Improves soil composition by enriching it with nitrogen compounds. Widely used in medicine, more directly in dermatology.

Flowers and upper leaves are used for medicinal purposes. Harvest during flowering. Flowers with leaves are dried on sieves or in dryers at a temperature of 60-70C, care must be taken not to dry the drugs too much, in this way they lose their value. Flowers are stored in closed containers for up to 2 years, leaves for up to 1 year. In very rare cases, clover roots are also collected.

In folk medicine, inflorescences are used, and in rare cases also leaves. The plant is harvested at full bloom.

Clover is used for anemia, painful menstruation, prevention of arteriosclerosis, externally in baths in case of children's rickets.

Clover roots are used in inflammation of the ovaries and as a remedy for tumors. Fresh, mashed leaves are used (in the form of applications) to stop bleeding, in wound healing, in case of burns, abscesses, rheumatic pain. The juice squeezed from the clover will help well in the case of nail damage, skin tuberculosis, panaritis, hernias, ear and nose diseases. Clover tea is also used for severe respiratory diseases - bronchitis, bronchial asthma, chronic rheumatism, asthenia and kidney diseases.

Clover can also be used for dermatological purposes, it is used orally in the treatment of diseases caused by allergies and infection-allergies. It is used externally, in the form of applications, to heal burns and boils.

Under no circumstances should clover be used by pregnant women, as well as people who have problems with varicose veins and who suffer from thrombophlebitis. People who are prone to diarrhea, stomach pain, estrogen-independent cancer should also avoid. It is also not recommended for heart patients and those who have had a stroke.

Decoction of clover roots: pour 200ml of hot water over 20g of crushed drug, boil in a closed enameled container in a water bath for 30 minutes, separate the thickets for a hot decoction through 2-3 layers of cheesecloth, the thickets can be squeezed out and the remaining decoction is topped up with boiled water, up to the original volume. Use one tablespoon 4-5 times a day before meals.

Setting of clover flowers: pour 20g of the drug with 200ml of boiling water, set for 1 hour, then separate the thickets. Use 2-3 tablespoons or ½ glass, 3 times a day.

Stabilization of the surface part of clover: pour 40 grams of the drug with 200 ml of boiling water, let it steep for 1 hour, then separate the layers. Take ¼ cup, 3-4 times a day.

Clover juice: The juice of the plant is made from the entire above-ground part of the plant. Take ¼-1/3 cup, adding one spoonful of honey, 3-4 times a day. The eyes can be rinsed with the plant's juice or solution in case of inflammation.

Decoction: 1 tablespoon of drug per 1 glass of water, boil for 1 minute, leave in a warm place for 1 hour, get rid of the thickets. Take ½ glass, 3 times a day after meals.

Setting: 2 tablespoons of the drug per 1 glass of boiling water, let it sit for 1 hour in a warm place, remove the thickeners before use. Use ½ glass, 3 times a day after meals.

Alcohol extract: 4 tablespoons of drug in 0.5L of 40% alcohol, put in a warm and dark place for 10 days. Use 1 teaspoon before the last evening meal.

Usually, decoctions of clover are calculated as follows: 1-2 tablespoons of leaf drug per 1 glass of boiling water. Boil like tea and leave for 40 minutes. Take 2 tablespoons, 2-3 times a day before meals.

It is mainly used against anemia, lack of vitamin C, headaches and also as a preventive measure in case of atherosclerosis. Water-alcohol extract is used as an additional remedy in case of pulmonary tuberculosis. Decoction, as applications (3 tablespoons of flowers to 1 glass of water, boil for 1 minute, let stand for 2 hours) is used as an antifungal agent.

Children are bathed in a decoction of clover to treat scrofula, it can also be given orally. The same decoction is also used in baths if the child has rickets.

Ointment: put the flowers in vegetable oil (1:2), for 2 weeks in a warm place.

The young leaves are used as a salad, cooked as a substitute for spinach. Dry and powdered leaves are added to flour when baking rye bread, as well as used in sauces and cheese production.

For food, it is best to use meadow clover (Trifolium pratense), the one with purple-red flowers, more often there are two inflorescences on one flower stem and it has a kind of white semicircle on the leaves. Even children like to eat the inflorescences of this plant fresh. But in food, both leaves and inflorescences are more often used in salads, as a substitute for spinach. the leaves are usually dried and ground into powder. The powder is added to the flour, from which the bread is further baked.

You can also encounter bastard clover (T.hybridum) in the wild, but it will be much rarer. It is very similar to the usual creeping clover (T.repens), only in the inflorescences some of the flowers will be pink, purple. This clover has a bit bitter taste, so in food, it is not so good. The same is true with creeping clover, which is the most common clover in Latvia.

In recent years, at least in my region, I've been seeing mountain clover (T. montanum) more often, the stands are not big, but still. According to the taste, this clover is also edible, but it is not particularly tasty. But as a medicinal plant can be used, both!

Clover can also be prepared for the winter and stored in airtight containers, in ground form. Most often, clovers are used in salads, soups and purees. When clover is thermally processed, it cooks well and becomes pleasantly soft. There is a reference everywhere that when preparing soups or purées using clover, it is desirable to add sorrel as well.

Clover flowers are boiled for 20 minutes, then cooled completely (2-3 hours). For the decoction, separate the thickets, add sugar, mix.

Boil the pork until it is not done, then fry it. Clover leaves are stewed in a small amount of water and fat, salt and pepper are added and used as a side dish for meat. Hot sauce can be added.

The leaves are dried in the fresh air, finished drying in the oven, crushed in a pestle, sifted through a sieve. Used as an additive to soups (1 tablespoon per 1 bowl of soup), sauces and other spices.