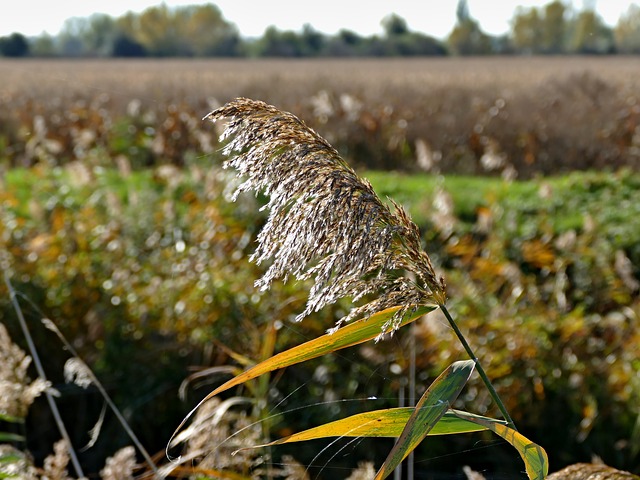 Common reed is a perennial plant, with a long (up to 2m) creeping root and a strong, hollow, leafy, upright stem (up to 5m). Leaves linear-lanceolate, flat, with sharp edges. Long, rare hairs on the underside of the leaf. The plant is durable because of the hollow stem.

At the top of the stem, a dense pyramidal broom is formed, 20-50 cm long. Inflorescences are dark purple, brown or yellow, each with 3-7 flowers. The lowest flower is male, the others bisexual. The reed begins to bloom in June and the flowering lasts until mid-autumn. Fruit - an elongated grain. The fruits do not always ripen.

Young shoots, stems and leaves, as well as fruits and roots are collected for medicinal purposes. The young stems and leaves are harvested in mid-May and June. Dry spread out in a shady and well-ventilated place, stirring the drug frequently.

Reed roots are dug from the bottom of rivers and other bodies of water in early spring until the moment when the plant begins to bloom or are harvested in late autumn (October-November). The roots are washed and then dried in ovens or ovens, not exceeding a temperature of 50C. A well-dried drug crumbles well and has a pleasant, sweet taste. In dried form, the surface part of the plant is stored for up to 1 year, the roots for up to 3 years.

Common reed preparations are not recommended to be used during pregnancy and lactation, if there is an individual intolerance to the plant or a tendency to allergic reactions. The plant is also not desirable for small children.

Common reed roots have been used in food for a very long time, especially when wheat and rye flour was replaced by up to 80-90% with dried and ground roots. Unfortunately, the root contains a lot of fiber and due to this, people developed sick symptoms. People pampa, they grew big bellies, in which lived a constant heaviness and pain. Therefore, reeds should not be made the main dish under any circumstances. It is more valuable to make cane starch from it. But let's hope that we won't have to completely switch to eating reed roots.

It is not recommended to use reed root for those whose high fiber content can be harmful - people with gastritis, stomach ulcers, gallstones.

The roots are cut into 2-3 cm pieces, boiled in salted water, covered with chopped sorrel and poured with oil.

Reed roots are boiled in salted water, chopped and cream is added.

The roots are dried and roasted in the oven until brown. Grind and use as coffee.

The roots of common reed are boiled, chopped in a meat grinder, fried onion and nettle are added, salt is added and vinegar is added.