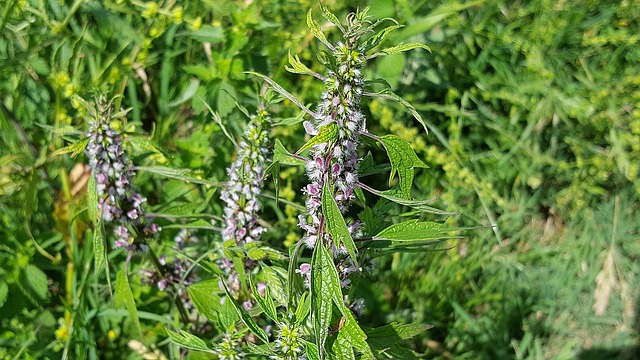 Five-lobed motherwort (Leonurus quinquelobatus Gilib) - a perennial plant, 50-150 cm tall, in rare cases up to 200 cm. It has one or more stems. The stem is erect, four-sided, branched, with short curly hairs in the reinforcement. Leaves on stems, arranged oppositely, bright green, grayish underside, covered with hairs. The lower leaves are split in half, five-lobed, the upper three-lobed. Flowers pink, located in upper leaf axils. The plant blooms from June to September. Fruits are nuts.

Motherwort (Leonurus cardiaca L.) - a perennial plant, up to 150 cm tall. The stem is erect, four-sided. Leaves on stems, oppositely arranged, dark green, covered with thick hairs. The lower ones are round or oval, split to the middle of the leaf, five-lobed, the upper ones are simpler. The flowers are pale pink, located in the axils of the upper leaves. It blooms from June to September. Fruits are nuts.

The above-ground part of the plant is used for medicinal purposes. The plant is harvested at the beginning of flowering, harvesting the tops of the plant up to 40 cm long, without cutting the stems thicker than 5 mm. Collect in dry weather, dry in the fresh air, in the shade, in the attic or in forced dryers not exceeding 60C.

The medicinal effect of the plant is determined by its flavonoids, iridoids and alkaloids.

The Motherwort has a pronounced sedative effect (calming). Plant preparations act as spasmolytic and anticonvulsant agents, reduce the heart rhythm and increase its contraction, have a pronounced hypotensive and cardiotonic effect. The Motherwort has a beneficial effect on the carbohydrate and fat exchange process, reduces the content of glucose, lactic acid and pyruvic acid, cholesterol, lipids in the blood and normalizes protein metabolism.

Motherwort extract is used as a sedative in cases of nervous tension, early stages of hypertension and sleep disorders.

Iridoids have various properties: immune system stimulating, choleretic, laxative, antimicrobial, fungicidal, antitumor and others, but above all sedative, so these plants are used to create medicines based on natural origin. The iridoids present in the plant enhance the effectiveness of the complex therapy of arterial hypertension, which is accompanied by psycho-emotional disorders, and also allow to reduce the dose of antihypertensive drugs.

The antispasmodic properties of the plant are provided by the effect of flavonoids and iridoids present in the plant. Bitter substances and flavonoids improve digestion and have a choleretic effect; triterpenes have a cardiotonic effect, create antisclerotic activity, enhance the effect of cider glycosides.

According to various authors, motherwort extract acts 2-3 times more strongly on the CNS than valerian extract. Motherwort preparations are often more effective than valerian. Motherwort, thanks to rutin, produces a significantly stronger antioxidant effect when compared to hawthorn tincture.

When using maternal preparations, its therapeutic effect appears relatively slowly, so the dose is usually adjusted individually, taking into account the clinical picture of the patient's illness.

In folk medicine, motherwort is used as a strengthening, calming, anthelmintic, reducing the feeling of heaviness in the stomach area, treating impotence and prostate adenoma, and as a diuretic. Externally, it is used to treat trophic ulcers and burns.

Since the thirties of the 20th century, the alcoholic extract of this plant has been used in official medicine as a sedative.

Motherwort should not be used by patients who suffer from arterial hypotension and bradycardia. These agents should be used with caution in patients with thrombosis and thrombophlebitis.

Of course, during pregnancy and lactation, this plant is not used.

Motherwort instructions: pour 1 tablespoon of the drug with 1 glass of boiling water, leave it in a warm place for 1 hour, separate the layers, use ¼-1/2 glass, 2-3 times a day before meals. Drink in cases of increased nervous excitability, neurosis, cardiosclerosis, heart palpitations, functional disorders of the nervous system, climacteric period.

Motherwort instructions: pour 15 grams (4 tablespoons) of the drug into an enameled container, pour over 202 ml of hot boiled water, close with a cap and heat in a boiling water bath, stirring often, for about 15 minutes. Cool for 45 minutes at room temperature, separate the thickets, squeeze out the thickets. The resulting solution is added to the original volume with boiled water. Take 1/3 cup, 2 times a day, 1 hour before meals.

Maternal alcohol extract: the extract is prepared in a ratio of 1:5. The Motherwort is sprinkled with 70% alcohol and kept for 1 week in a warm place, separate the thicknesses, use 1/2 teaspoon per 1 tablespoon of water, 3-4 times a day before meals.

In the second variant, the alcohol extract of the Motherwort is used 30-50 drops, 3-4 times a day. Used like valerian tincture, only more effective.

Motherwort infusion, extract and juice are used. The setting, as a bactericidal and anti-inflammatory agent, can be used not only orally, but also as a compress, in the treatment of bath burns and long non-healing wounds.