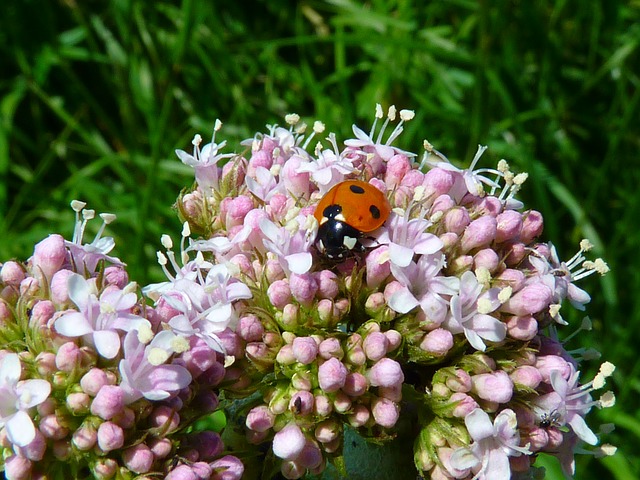 Valerian is a perennial plant up to 60-150 cm tall. The plant has a small root up to 1.5 cm long, with many adjacent roots. The rhizome and roots have a strong and distinct smell. The stem is erect, grooved, hollow, branched near the inflorescences. Its small flowers, arranged in umbel-shaped inflorescences, are white, soft pink or light purple in color. Roots of second-year leaves petiolate, upper sessile, lanceolate, divided into odd tufts, with 5-13 tufts.

Fruit - a grooved, elongated, egg-shaped, flying seed with a 2.5 to 4.5 mm length. The plant blooms starting from the second year, from June to August.

Valerian has a multifaceted effect on the human body. It acts as a sedative, calms the CNS, reduces its excitability, has an antispasmodic effect (reduces smooth muscle spasms). As well as valerian enhances the secretion processes of the digestive tract and the separation of bile.

Through the CNS, valerian also affects the heart. Valerian essential oil reduces the excitability caused by caffeine, prolongs the effect of sleeping pills, increases the activity of the cerebral cortex, has an inhibitory effect on the extended and middle part of the brain. The essential oil borneol has an effect on the cardiovascular system, improving coronary blood circulation.

Valerian preparations reduce reflex excitability in the CNS and have a depressing effect on brain neuron activity processes, improve sleep, and have coronary vessel dilating properties. The effect of valerian is noticeable slowly, but it is stable. The effectiveness of this plant can be observed when using it systematically and long-term, creating a therapeutic effect.

Valerian has been used since ancient times as a monopreparation, as well as as an ingredient in various complex remedies.

However, care should also be taken with valerian, as long-term use of this herb can cause digestive tract disorders, especially constipation.

In folk medicine, valerian has gained the fame of a sedative (sedative) agent, it is also used to improve and treat heart function and digestive tract function. This herb is also used during climacteric disorders.

The effect of valerian is highly individual. A large number of people get a stable and lasting effect from using valerian (systematic and long-term), but there is a group of people who cannot tolerate valerian.

Valerian should not be used in case of chronic enterocolitis, it may cause exacerbations, as with hypertensive patients it is not desirable, as it may cause irritability and disturbed sleep if there is an allergic reaction to this herb.

Valerian preparations increase blood clotting, which is not desirable for people in the elderly, especially if there is a risk of stroke or heart attack. In glomerulonephritis, valerian irritates the kidney parenchyma.

Valerian in any form, is not recommended to be used for more than one month without interruption, as discomfort, headache, nausea, anxiety, digestive tract disorders, and heart failure may occur.

Valerian decoction: 1-2 teaspoons of drug per 1 glass of water, boil for 1 minute, let stand for 30 minutes, separate the thickness before use, use 1 dessert spoon (children - 1 teaspoon) 3-4 times a day after meals,

Valerian decoction for baths: 1-3 tablespoons of drug in 2L of water, boil for 1 minute, let stand for 1 hour, use overnight, procedure duration 15 minutes.

Valerian extract: 2 tablespoons of rhizome and roots, 250ml of 70% alcohol. The plant is washed, dried, chopped, sprinkled with alcohol. Leave for 20 days, shaking the extract often, then separate the layers. Use 15-20 drops, diluted with water, 2-3 times a day. Acts as a sedative - in case of depression, insomnia, cardioneurosis, climax and hysteria.

Preparation of valerian roots: 10g of crushed roots and rhizomes are placed in an enameled container, poured with 300ml of boiling water, closed with a lid and heated in a water bath (in boiling water) for 15 minutes, cooled at room temperature for 45 minutes, separated from the pulp, squeezed out. The obtained setting is supplemented to the initial volume. Take 1-2 tablespoons, 3 times a day, 30 minutes after meals, one dessert spoon for older children, 1 teaspoon for small ones.

Valerian infusions and decoctions are recommended to be stored in a cool place, also in the refrigerator, at a temperature not exceeding +10C. Validity period no longer than 2 days. Valerian root can also be chewed during epidemic diseases: typhus, cholera, scarlet fever. Before using valerian, consultation with a specialist is recommended.

Valerian is given to children in case of nervous tension, fright, epilepsy, and decoctions are made from its roots, which are added to baths. After bathing, let the product soak into the skin - drying the skin, but not wiping. Such soothing baths can also be used by adults (stronger concentrations) who have problems with insomnia caused by nervous agitation. Baths can be used once every two days.

In folk medicine, valerian products are also used as digestion-improving agents, it is recommended as an appetite stimulant, in cases of bile-repelling liver diseases, bile ducts and gall bladder diseases, in case of flatulence, it removes spasms; expands blood vessels, improves gastric and pancreatic secretion. Valerian is recommended for young children in case of colic, when gas is poorly expelled. If the child rubs his leg along the leg and bends it in the leg, pulls him to the punch and cries a lot, he needs to be given an infusion of valerian root (1 teaspoon of drug to 1 glass of boiling water, let it sit for 2 hours, separate the thickness and use 0.5-1 teaspoon, every 2 hours ) or a decoction mixture of valerian, dill seeds and chamomile flowers - in equal parts. Apply valerian root extract to the child's face (clockwise) and wrap the child in a warm blanket.

In case of digestive tract colic, fever and vomiting, valerian extract is used orally and in the form of enemas. At first, make a cleansing enema from a decoction of valerian and chamomile flowers, after 10-15 minutes, repeat the enema, as a basis, from the same decoction.