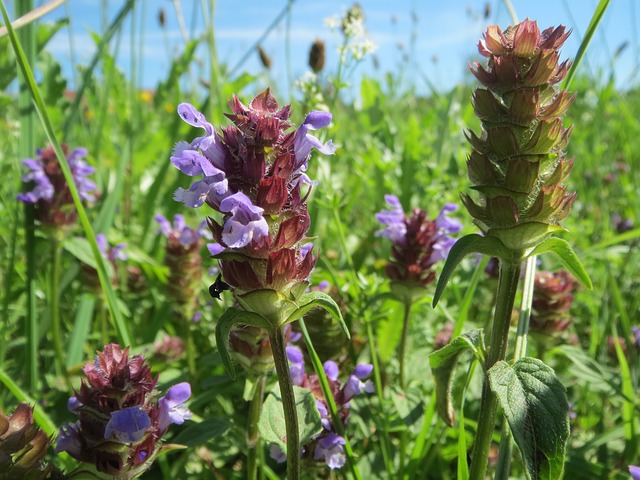 Selfheal (Prunella vulgaris) is a perennial plant, 10-40cm tall, with a creeping root. Please, do not confuse this plant with the large-flowered Selfheal (Prunella grandiflora ). The stem of the plant is four-sided, erect, often reddish in color, leafless in the lower part, curved in the middle, pale hairy in the upper part. Leaves without leaflets, opposite, grow on petioles - elongated oval or lanceolate. Upper leaves sessile, toothed. The flowers are small, bisexual, zygomorphic, violet-blue or blue, collected in dense cone-shaped inflorescences. As the fruit matures, it will divide into four parts - seeds. Seeds without endosperm. Blooms from June to September.

The above-ground part of the plant (stems, leaves and inflorescences with all flowers) is used for medicinal purposes. The plant is collected according to the time of flowering, starting from June to September.. You can also collect the seeds in autumn when they are ripe. Dry the plant in bundles, on sieves or in dryers at a temperature not exceeding 40C. The drug is stored for 1 year in paper bags.

Although the plant is not used in official medicine, due to the chemical substances in its content, it has medicinal properties.

Thanks to the tannins present in the plant, it has an astringent and wound-healing effect and has antiseptic properties. Thanks to the vitamin C present in the surface part of the plant, the plant acts as an antioxidant and has a temperature reducing effect. Bitter substances have a beneficial effect on the intestinal tract, also improving appetite. The Selfheal has a diuretic and diaphoretic effect, has a beneficial effect on the metabolism and promotes the release of sputum from the upper respiratory tract.

In folk medicine, the spectrum of application of this plant is huge. The plant is used as a biological stimulator that activates the body's antimicrobial response, as a blood-stopping agent in the case of nosebleeds, for the treatment of thrush in women, in the case of eye diseases (conjunctivitis) and in the case of upper respiratory tract diseases (angina, bronchitis, laryngitis, diphtheria). The plant is also useful for treating colds, kidney diseases, even various malignant neoplasms and is also used as an appetite stimulant. It is also used for hypertension, various edemas, diarrhea, rheumatic polyarthritis, stomatitis and as an antihelminthic remedy.

The extract of Selfheal is successfully used to prevent inflammation of the gums and to treat the herpes virus. Gargle with a decoction of the Selfheal to cure angina. Folk medicine specialists see a great potential in the plant in the treatment of HIV, as well as to treat diabetes and lung cancer, but science does not support this.

A decoction and infusion of plant leaves is used in folk medicine for epilepsy. By the way, plant extracts are used as a hypotensive and diuretic agent to treat hypertonic disease, it also treats tuberculosis of the skin and female genital organs, hyperthyroidism, exudative diathesis and rheumatic polyarthritis. The fruits of the Selfheal are used in hypertensive disease and nephritis. Young shoots and leaves of the plant are used fresh as a first aid in case of fresh wounds (similarly to how we used the leaves of the road in childhood).

You can also wash your head with a decoction of Selfheal to prevent dandruff. It is also used in baths and as an application in case of various dermomycoses and furuncles. This is also one of the few herbs that can be used to wash bedsores and wounds. Folk healers also widely use this plant to make various ointments, as an element for treating skin diseases.

The Selfheal is a poisonous plant. Therefore, care should be taken when using this herb orally. An overdose of herbal preparations can cause side effects (poisoning with accompanying nausea and vomiting, dizziness, headache, cutting pain in the abdomen and frequent urination). The plant is not recommended for pregnant women, nursing mothers and children under 12 years of age.

Drink from the Selfheal and mint

A drink made from Selfheal and wild raspberry

Add a glass of raspberry juice to the previous recipe.